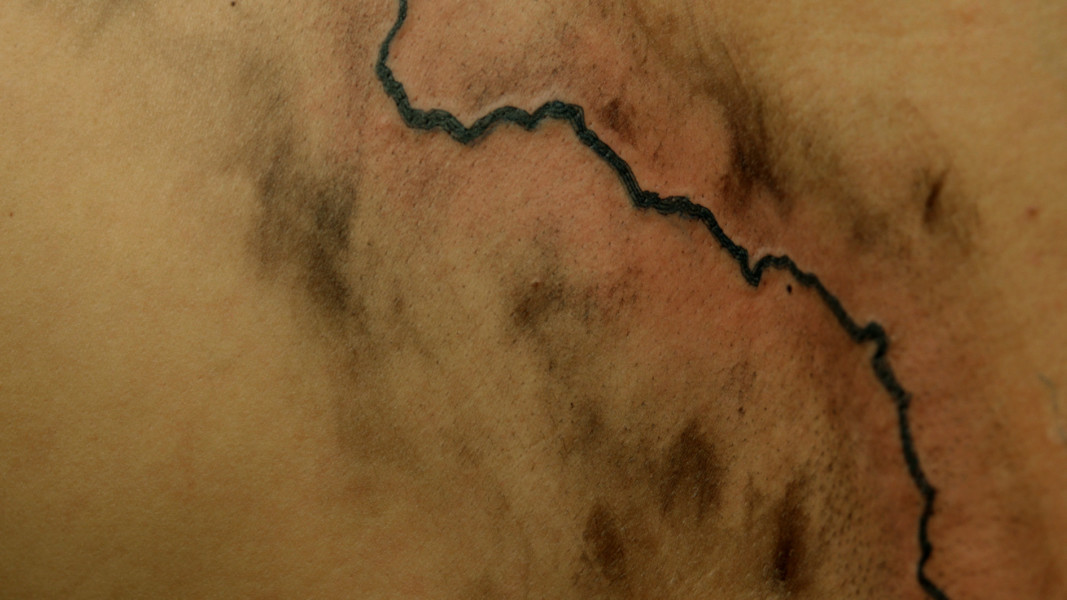 Douglas Gordon’s work uses the demarcation line of Korea’s Demilitarised Zone (DMZ), the strip of land separating North and South Korea, to trace a literal and metaphorical boundary. The film tracks the DMZ border being tattooed vertically along the spine of a young Korean man, Janus Hoon Jang. It follows the tattooist’s needle moving down and across his skin and the motifs of the political and personal jar in a private act that is both tender and violent. The delicately balanced contradictions of the emerging image and it’s meanings are haunted in real time by Okkyung Lee‘s improvised cello accompaniment; a keening, in fact.

Janus Hoon Jang, adopted by a Danish couple, often returns to Korea to research his family history. He currently lives in Copenhagen, Denmark.

Douglas Gordon (born 1966) is a Scottish artist. He won the Turner Prize in 1996, the Premio 2000 at the 47th Venice Biennale in 1997 and the Hugo Boss Prize in 1998, among others. In 2012, Gordon became a Commandeur dans l’ordre des Arts et des Lettres, awarded the title by the French Cultural Minister in Berlin on behalf of the French Republic. He lives and works in Berlin, Germany.

Okkyung Lee (born 1975) is a South Korean cellist, improvisor and composer. She has collaborated with a range of musicians and artists including Laurie Anderson, Christian Marclay, Thurston Moore and John Zorn. She is based in New York, USA.

Produced by Locus+ and lost but found film limited in partnership with the Korean Cultural Center, London, UK

This project is supported by Korea-Arts Council England joint fund

Void Gallery is supported by the Arts Council of Northern Ireland and Derry City and Strabane District Council with events sponsored by Northbound Brewery.