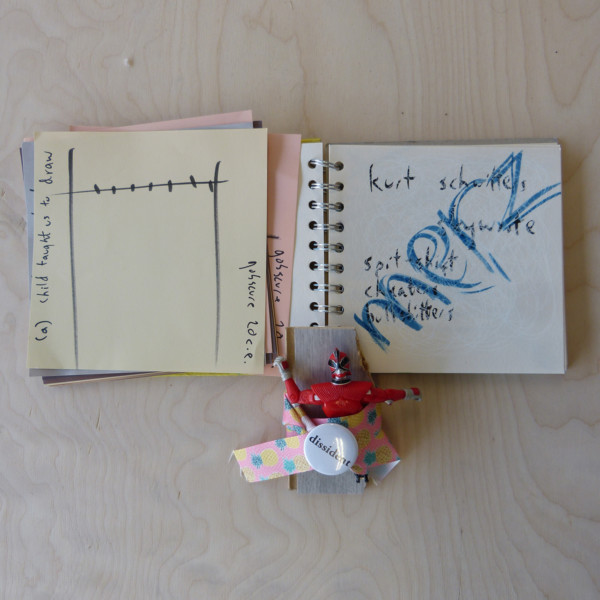 as a child we sometimes traveled to newcastle-upon-tyne where one of our favourite things was running around making as much noise as possible in a gallery and then standing still so that by the time the art-guards caught us we’d be seriously staring at art before bursting into laughter once they’d gone off on their rounds once more. the thing we most liked to laugh at (still do) is the merz wall by kurt schwitters in the hatton gallery, newcastle-upon-tyne. as kid all we knew is there’s a barn wall in a gallery. a barn wall with curves in it. a barn wall removed from a barn on the other side of england and driven clear across england just to be put in a gallery. still makes us giggle. art should be about making folx laugh … among other things … then we found out more about kurt. everything was art to him – fairytale, typing, porridge, collage, radio, barn walls – just some of his ways of processing none-sense of the world, two world wars included, and also his various disabilities – epilepsy, depression, anxiety, ocd (some of these are more modern terms and sometimes contested) – towards the end of his life a fatal heart condition. yet he was itchy, restless, making sense in ways that no-one else dared. sure folx collaged, installationed, typed, built from found things – but he did all this more widely than others and for way longer too. bbc pulled plug on him broadcasting his ur-sonate, nazis called him a degenerate forcing him to flee twice. the second time to britain – who interned him for 17 month hastening his death. but he made porridge sculptures inside to keep his mind free (it stank the place out). he finally found freedom in the lake district and traded conventional art for food while working on his final merz (what he called his work – after a torn scrap from a banking flier) … dying as his immigration papers were en-route. were not academic, just human, but we love his big-kid, playful, subversion, art to make sense of a non-sensical world.

this is why were coming to Derry. to be playfully subversive in the city where James King a playfully subversive artist we admire much, lives. James and collaboro-angels will be playing in / around the space on 2nd july while we are there too for waiwav – we are invisible, we are visible – thanx to dash and the ampersand award. were bringing some pre-existing work relating to kurt / dada / and playful protest. more of this work will be online – e.g. our film ur’s for kurt, finalist in the 100 years of dada award at the ica in london in 2016. as well as a new spoken-text-collage replying to kurt schwitters poem what is madness made for this occasion.

however the main thing we are doing slowly, gently, playfully across the course of the afternoon on 2nd july is transforming kurts poem ; ‘what is madness’; written large across the education space walls on instant whiteboard into something new. we will mess with the poem using whiteboard markers so that it mutates (madness into add mess just for eg), regenerates, illustrates, invisibly-visible or visibly-invisible into a new temporary piece of wall-write-art for folx of Derry and beyond.

the final two lines of kurts poem what is madness? read,

‘… politics stand at the soft core of our time.
may that core soon soften further and may it leave our time free space for being free’

do come to Void gallery between midday and 4pm on 2nd july and see how we can all make free time for being free. love&rage, gobscure, june 22c.e.