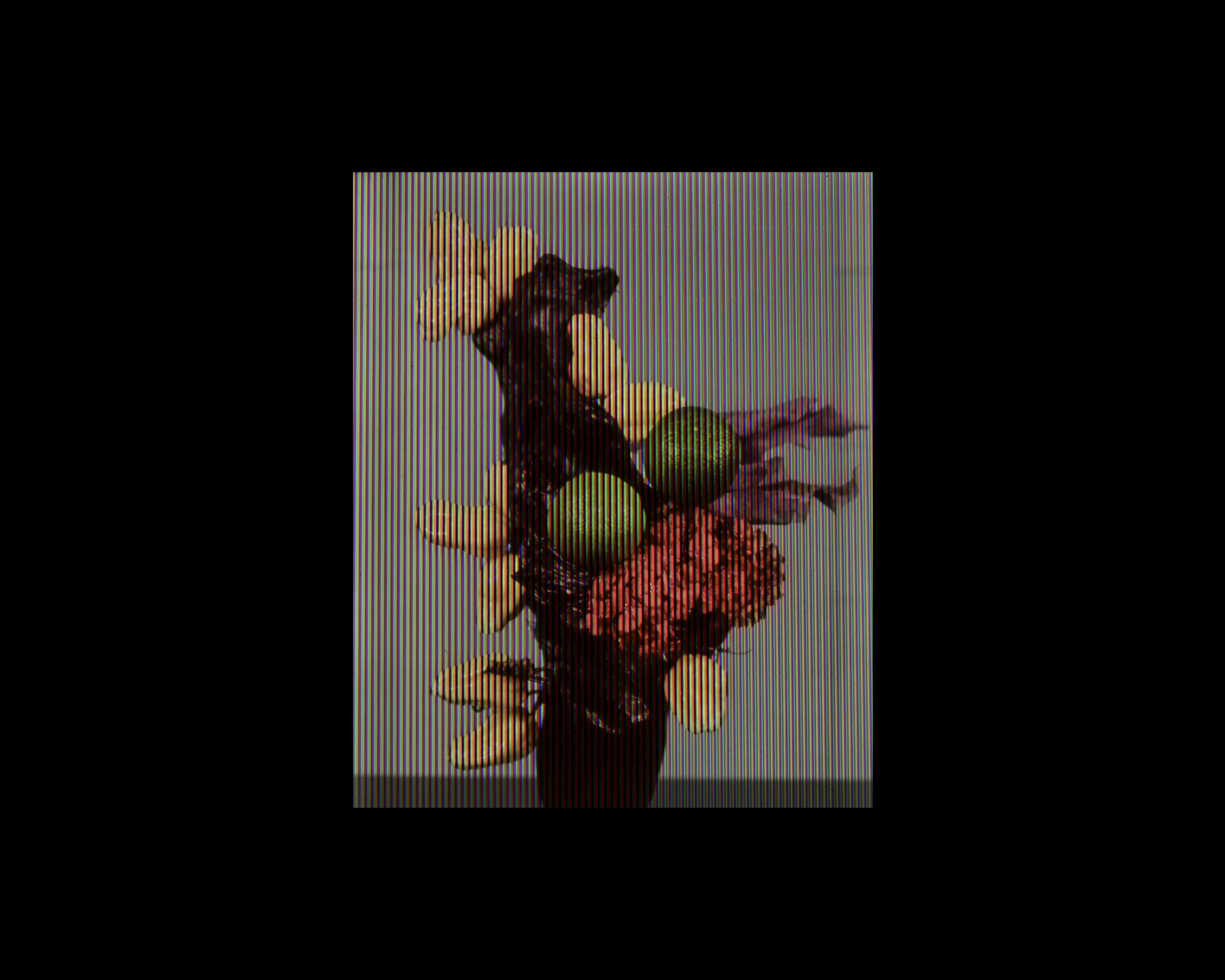 Alan Phelan’s exhibition echoes are always more muted is part of an expanded series of exhibitions that encompass his continuing research into the intersections of history, sexuality, material culture and politics which have evolved through sculpture, participatory events, and photography.

The genesis of this new body of work is the photographic process invented by John Joly (1890s) that created colour via a red, green and blue screen to create the full colour spectrum. The two-layer photograph consists of the striped colour screen and black & white sheet film, which also creates a unique colour shift upon viewing. The process was used into the early 20th Century and abandoned for colour without stripes.

John Joly, the inventor of the process, provides the biographical background to the 15-minute film Folly & Diction (2020). Instead of a detailed documentary, the music video format provides the structure with a narrative taken from a Samuel Beckett short story and narration in the form of song lyrics, culled from a poem by Jean Genet. The video tells an oblique story of loss, a forgotten history, and a failed relationship with his collaborator Henry Dixon. It brings Joly’s photographic process into a contemporary sphere with audio responsive animated stripes that pulse to the music and crude video layering that draws on multiple music video tropes.

Red, green and blue form the basis of how video screens present colour and how we experience colour in all electronic devices; this provides the background for other works in the exhibition. The centre piece of Gallery 1 is an installation of various props and parts which further expand the idea of a photograph as a multi-sensory object moving into an augmented reality and fragrance as a memory trigger. A small RGB hyacinth flower is enlarged via a mobile phone AR app and the sweet scent of the flower pervades the gallery. The mattress, pot, and plant notebook connects to the film, referencing an earlier script – elements that were eliminated in the final cut. The flower has persisted, however, as a memory trigger, as in the film, just like a fragrance, to a different sensory connection with the past.

The recurring use of this trio of colours shift to gels on spotlights, onto a new wall work comprised of screen-printed page layouts, from a zine dealing with images and texts that delve into a wider art history of stripes. The wall is punctuated by a single Joly screen photograph of a headless self-portrait, shot from behind, in red, with red roses, pushing bathos that bit further.

Five new Joly screen images hung close to this are the most recent photographs. They have dense compositions made of dots, with holes in the screen that reflect onto circular mirrors, creating monochrome gaps in the striped screen, overlapping into the objects photographed. Works by John Baldessari and Sigmar Polke provide more recent histories as reference points here.

Ten Joly screen images in Gallery 3 traverse different art histories relating to the pre-photographic photo realism of 17th Century flower paintings; moving through cinematic references, advertising, 1950s ikebana Japanese flower arranging, queer photography, and more. The inherent ambiguity of the images ghosts a history the process never had a chance to image or imagine. Convoluted titles attempt to navigate possible interpretative paths but they only leave echoes of a past that never happened and a present that has still more to achieve or reveal.

This series of works expands on Phelan’s preoccupation with re-imagining history in a contemporary guise, he appropriates histories, deconstructing others to make a mélange of humorous imagery that references the gamut of art and photographic genres. It is an exercise of storytelling that is at once all-encompassing but ultimately a story of invention, failure and love.

For more about Alan’s work please visit his website.

This autumn Alan Phelan will present The RGB Hyacinth as part of Void Offsites. Phelan’s project is a crowd-sourced sculpture made by individual participants in isolation, then assembled together to create the final artwork. This collective making process acknowledges and commemorates the COVID-19 crisis. The sculpture will be of a hyacinth flower; using the red, green and blue colours with petals made in papier-mâché, based around a small similar work due to be exhibited at Void Gallery as part of Phelan’s exhibition ‘echoes are always more muted’ which launches at the same time. It is funded by the Department of Foreign Affairs and Trade. The launch of this sculpture will take place in autumn – please stay tuned to our website for further details.