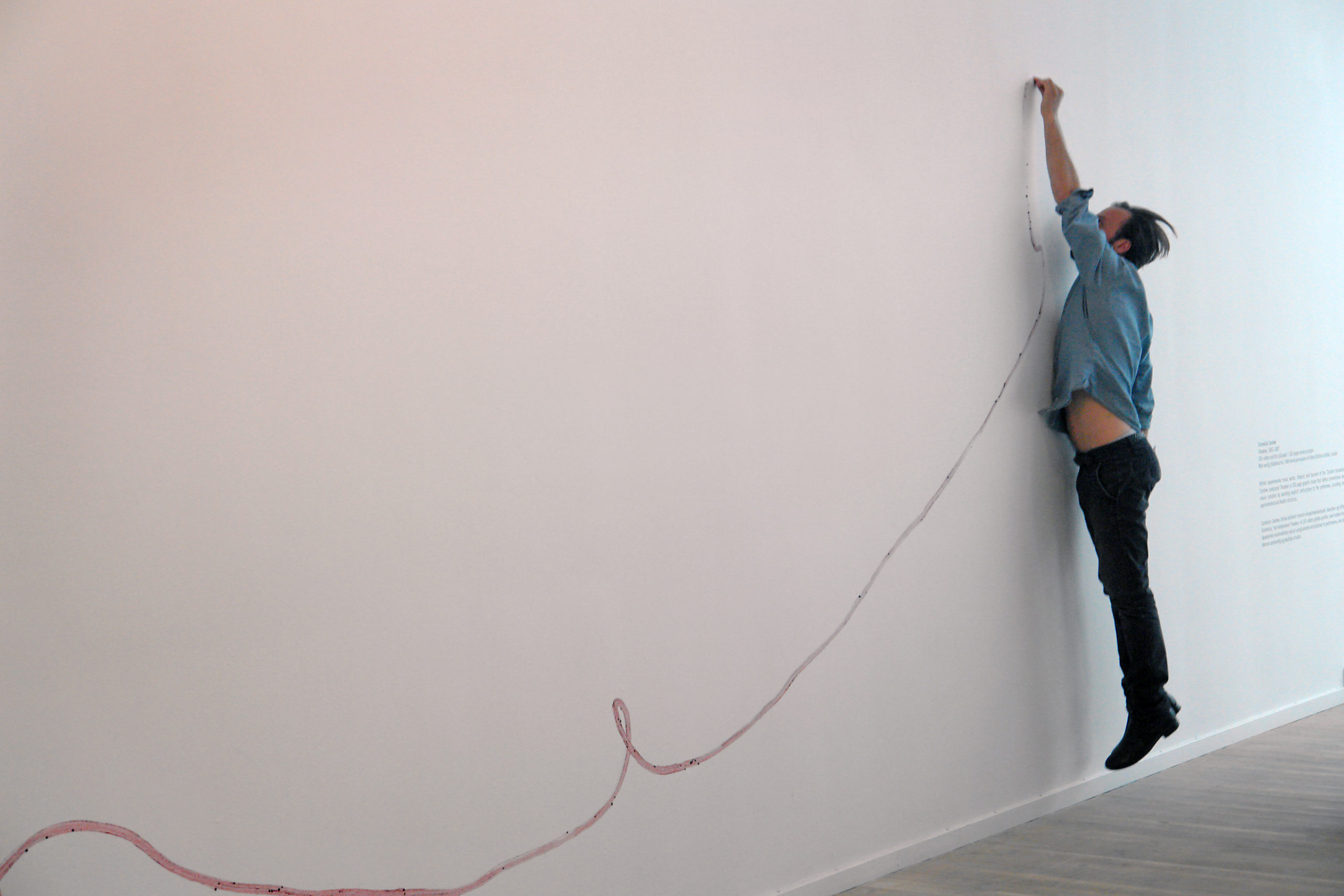 At the Gates of the Music Palace is a solo exhibition by Alex Cecchetti. Cecchetti’s multi-disciplinary practice explores the senses through the experiential nature of his work. His exhibition brings together performance, drawing, painting, sculpture and sound installation.  At the Gates of the Music Palace is conceived as a 3-dimensional music concert; the different sound pieces will be set in order to respond and resonate to each other and constitute a kind of composition. Music Palace exploits the logic of exhibitions to create an environment that accompanies the spectator in an unexpected sensory pathway.

There are polarities within his work where drawings become ethereal sounds and both presence and absence emerge. The slippage in his work is where the poetics reside and the narratives become material. In its regard one becomes at once both the performer and the viewer; this playful exchange is what titillates and remains an integral part of his work. This emphasis in positioning the viewer as central to the work has led Cecchetti to create space for the imagination where works can be experienced in a multitude of ways and we become part of a wider play.

Alex Cecchetti (1977-2014) was an artist, a poet, and a choreographer. Difficult to classify, his work can be considered as the art of the un-representable: tactile and poetic, aesthetic and materialistic, it creates mental and physical environments in which the spectators are often part of the work. Invited to walk backwards into a garden, to sleep at the sound of a choir singing in the deep of the ocean, or taking dance class from stones and staircases, the spectators are no longer defined to the role of the beholder. The artist died for the first time in 2014 for unknown reasons, though he keeps producing new works, presenting new performances and publishing new poems.

Daryl Martin is a synesthetic multi-instrumentalist composer and performer based in Derry-Londonderry. He is perhaps better known by his moniker ‘Porphyry’, under which he explores the myths and philosophies of ancient peoples through the medium of experimental music and performance art.

Since earning a Bachelor’s in Music from Queen’s University Belfast in 2015, Martin has worked extensively as a solo artist and in collaboration with Northern Irish musicians, performing across the UK, Canada and United States. After the success of his first installation Wildflowers of Creggan in late 2017, Martin’s interest has been focused on collaborative multimedia works.

If all matter jiggles, the universe is an orchestra: an artist-led tour of At the Gates of the Music Palace.

The exhibition will be punctuated by a unique concert featuring a synesthetic musician who will transform paintings by Alex Cecchetti into a work for the piano and a dancer who will activate the exhibition and guide viewers through choreographic experiences devised by the artist.

For more about Alex’s work please visit his website.

This exhibition is presented in collaboration with Spike Island and Void Gallery.

This exhibition is kindly supported by The Elephant Trust, the French Embassy Ireland, Institute Francais, Dulux.

Artist's talk 'if all matter jiggles, the universe is an orchestra' by Alex Cecchetti