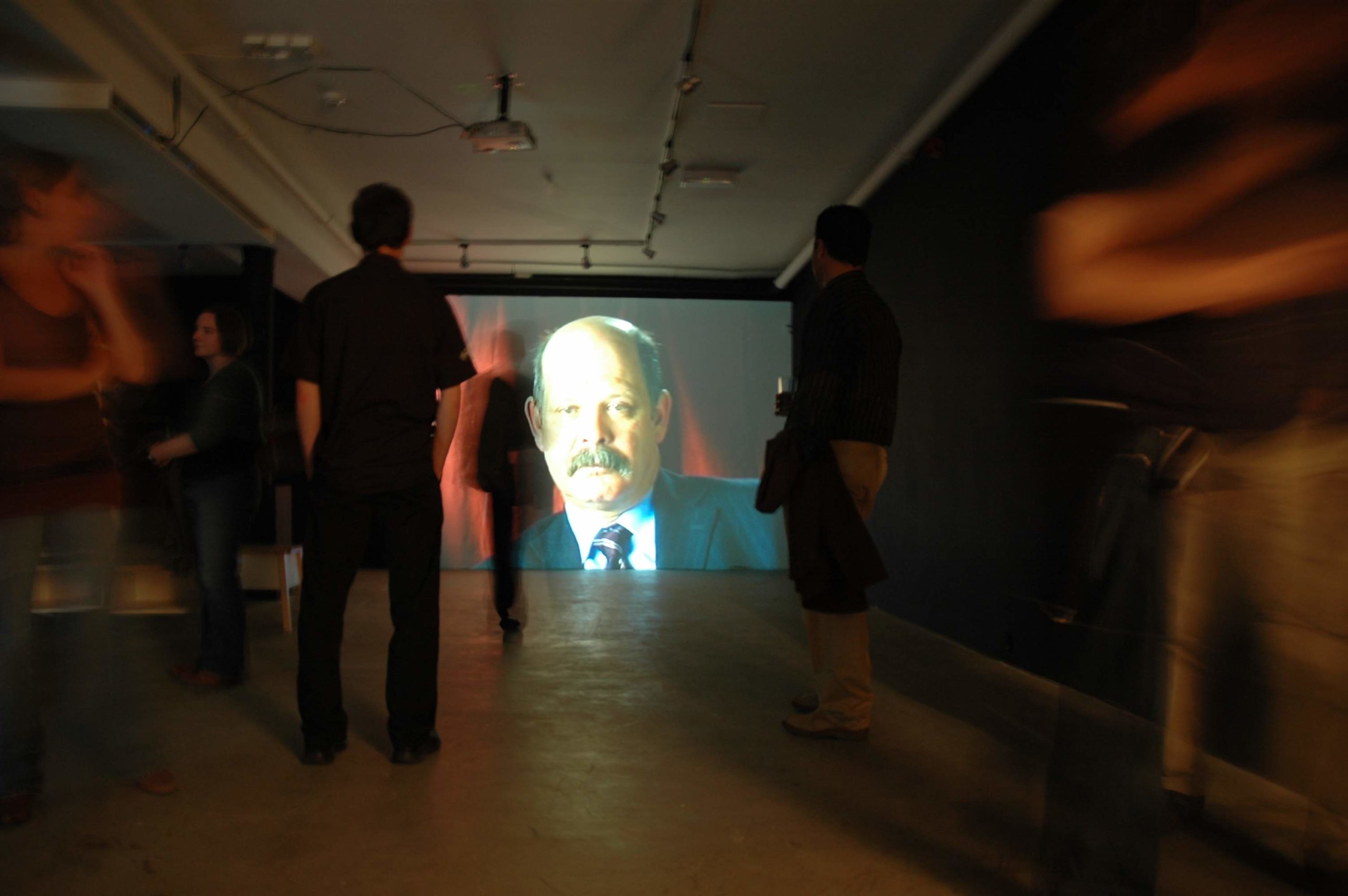 Void was delighted to host the solo exhibition The Keeper Series by Amanda Dunsmore.

It’s nothing new to see portraits of politicians – usually unadventurous oil paintings or bronze busts – but one doesn’t normally expect to see them in exhibitions of contemporary art.

Amanda Dunsmore’s new show, The Keeper Series, which opened at Void on 20 August 2005, challenges this tradition. Her portrayals of Sinn Feín’s Martin McGuinness and the Progressive Unionist Party’s David Irvine are silent video projections of the two politician’s faces, filmed as they watch one of Dunsmore’s earlier films.

This film, Billy’s Museum, is a documentary looking at items confiscated from prisoners at Long Kesh. It itself doesn’t feature in the exhibition, but the artist has used it for a new piece, made especially for Void. She asked David Irvine and Martin McGuinness to watch the film while a still camera recorded their responses. The resultant exhibition will consist of the two twenty-minute head shots projected large in one of Void’s gallery spaces, on opposite walls but not quite facing each other.

Amanda Dunsmore said of the installation that her aim was “to create a portrait based on traditional painted representation especially in reference to the lighting composition. Politicians speak to us through the media of the moving image, usually on television. These men are silent. Their silence allows the audience to study and contemplate these interesting individuals in a different way.”

The second video installation in the exhibition came from a copy of Shakespeare found at the Long Kesh library.

On one visit to the prison Amanda discovered the Nissan hut which acted as library for the Long Kesh Compound. The shelves were overturned into chaotic piles of books, abandoned & left decomposing on the floor.

One of the books Dunsmore examined was Shakespeare’s Anthony & Cleopatra. She found that the margins where covered in hand written notes. The men (there are four/five different styles of hand writing) who added their own notes and underlines to the pages, left evidence of their learning process, deconstructed by unknown hands.

This book became the inspiration behind her audio/visual installation. Reacting to the architectural features of the gallery space, Dunsmore has reconstructed the work and retitled it The Soldier & The Queen.

The creation of the two works for Void, brought together Shakespeare’s ancient Rome and Ireland’s contemporary political arena. The artist alludes to humanity’s passions and – like the prisoners she originally worked with in the Maze – she finds solace in literature, education and silence.

Amanda Dunsmore is a visual artist based in Limerick & Belfast. Her work explores concepts linked to social & historical issues using video, installation, photography and sound. She is a lecturer in Sculpture & Combined Media at Limerick School Art & Design, LIT.

“The Maze” prison was developed from the “Long Kesh” internment camp and once confined more than a thousand men. It became the scene for symbolic protests and radical agitation which led to its attaining a special status and focal point of the conflict in Northern Ireland. It played a significant role in the negotiations for the “Peace Process’ and was finally closed down on 29th September 2000.

In 1999 Amanda was one of the artists in residence in HMP The Maze, working with Loyalist and Republican prisoners. Through taking part in an artist in residency program she developed working relationships with the prisoners and prison staff. During this time she was given access to document security-sensitive areas such as the original Long Kesh Compound. The first artwork to come from this material was the video Billy’s Museum, which premiered at Artiade: Visual Art at the Olympics 2004, Athens, Greece. Dunsmore’s subsequent works include the audio installation Strikers, Narrative #1, The Soldier and the Queen and the Portraits series.

The premier exhibition from the The Keeper Exhibition Series took place at the
Triskel Gallery for Cork 2005 European City of Culture in April. Future
exhibitions are planned for Musée International de la Croix-Rouge, in Switzerland, The Holden Gallery, Manchester and The Galway Arts Centre.