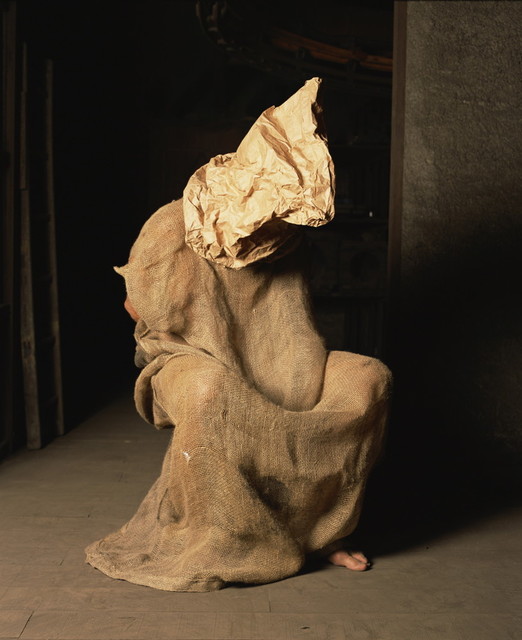 Over the last year, in the French industrial town of Maubourguet, Andres Serrano assumed the role of the torturer. Using The Foundry as his black-site, he photographed more than 40 models in improvised positions with devices produced on-site by local residents. Both mental and physical techniques were utilised with the participation of his subjects, under the guidance of a retired Commando from the French Special Forces.

This Danse Macabre recalls and points us to images and sources as widespread as Nazi Concentration Camps and Stasi interrogation centres to Abu Ghraib in Iraq and The Hooded Men in Northern Ireland who were subjected to reoccurring ‘deep interrogation’ tactics comprised of five techniques, wall-standing, hooding, subjection to noise, deprivation of sleep, and deprivation of food and drink.

The vast compositions have been elevated to the status of Renaissance altarpieces and are among the largest images the artist has ever produced.

Since the 1980’s Andres Serrano’s work has continued to spark debate and raise questions about censorship, taste, public decency and acceptable modes of expression. In 1987 Serrano received international attention for his work ‘Piss Christ’, igniting a naDonal debate on the freedom of artistic expression and the public financing of controversial artworks. Also included in this exhibition are two works from this era, Piss Christ and Black Supper from the Immersion series, both having shaped the artist’s global profile.

“Torture almost seems to be a part of the human condition” Andres Serrano, VICE 2016

Andres Serrano was born in New York City in 1950. Serrano received international attention for the scandal around his work Piss Christ (1987), igniting a naDonal debate on the freedom of artistic expression and the public financing of controversial artworks. He went on to produce series including the KKK, The Morgue and Shit. Throughout his confrontational and challenging work, Serrano unpicks the hypocrisies and highlights similarities within religious, political and social constructs.

For more about Andres Serrano’s work please visit his website.

For more information about a/political and their work with Serrano please visit their website.

Torture is presented in partnership with a/political: dedicated to the support and promotion of artists working within a socio-political framework; aiming to elucidate current social and political concerns.