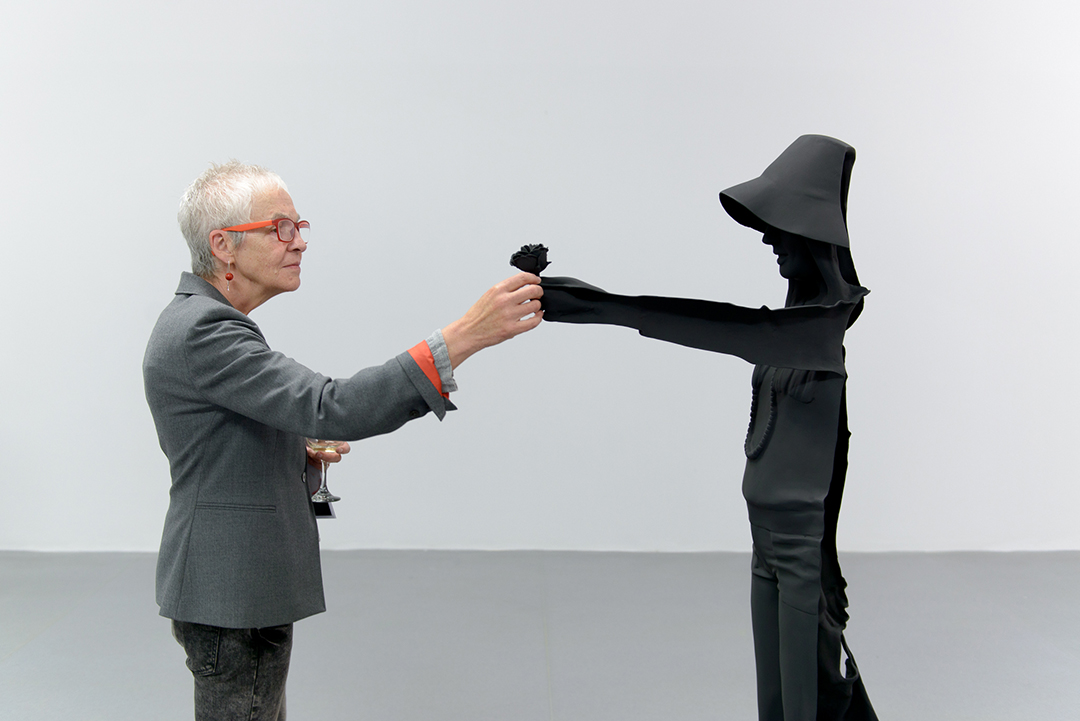 Void is proud to present the work of German Paris-based artist Brigitte Zieger. Curated by Gregory McCartney, Other Scenes explores virtual and spatial 3D images which relate to history and the integration of displacements between image, sculpture and space.

Zieger’s work relates to her interpretation of political and historical contexts and the images which emerge from them. She employs a diverse range of mediums, from drawing and cut-outs to video, sculpture and wallpaper. At the heart of Zieger’s work is the ability to draw the viewer in through its appealing aesthetic, only to be confronted by the subtle signs of violence which exist just beneath the surface: destruction, alienation, and oppression.

The forms that interest her come from the conflictual dialogue between image, surface and volume: digital bas-reliefs encrusted into images of sculptures, volume revealing its incapacity for comprehensiveness, and carrying within itself the wastage of information. Unlike Zieger’s previous work, which until now has focused on the protagonists of these ‘events’, the ‘little known spaces of this parallel history’, in which certain events have happened, occupies her attention. The viewer is encouraged to move through particular transcriptions, integrating displacements between image and space.

This exhibition explores the space which is represented and produces forms which are both typically digital and seemingly decaying, thus talking simultaneously of the future and of ruins, of a past perishing in a fragmented digital memory and a world in the period of dematerialisation. Zieger is motivated by this materialisation and dematerialisation, by the possibility of offering the viewer the opportunity to find him/herself physically included in this formal proposition, that one can approach as much on the poetic and sensorial, even aesthetic level, as on the conceptual level.

Zieger has participated in numerous international exhibitions and artistic events such as Abracadabra at the Tate Gallery London (1998); Prop Fiction at White Columns, New York (1997); Facing the Wall at the Museum of Pully and MUDAC, Lausanne (2010); the Digital Hand at the National Museum of Fine Arts, Taipei (2010); Bang! Bang! at the CCA Kunsthalle, Andratx (2011); Metamatic Reloaded at the Tinguely Museum, Basel;  Motopoétique at the Museum of Contemporary Ar, Lyon, and Late Harvest at the Nevada Museum of Art.

Recent solo shows include Shadows Dream the Man at the Aître St.Maclou with Kara Walker (2010); Counter-Memories at the Gallery Odile Ouizeman, Paris (2012); Wallpapered at Millennium Court Art Centre, Belfast/Portadown (2013); Everybody Talks about the Weather…We Don’t at the Gallery Weigand, Berlin (2014) and Pieces of Possible History at the Gallery Odile Ouizeman, Paris (2014); What if… ? at the Kunstverein Mannheim (2016). Her video Shooting Wallpaper joined was recently added to the collection of the Nevada Museum of Art and of the Los Angeles County Museum; it is displayed in the permanent collection of the LACMA until 2018.

For more about Brigitte’s work please visit her website

This exhibition is sponsored by the Fondation Nationale des Arts Graphiques et Plastiques.