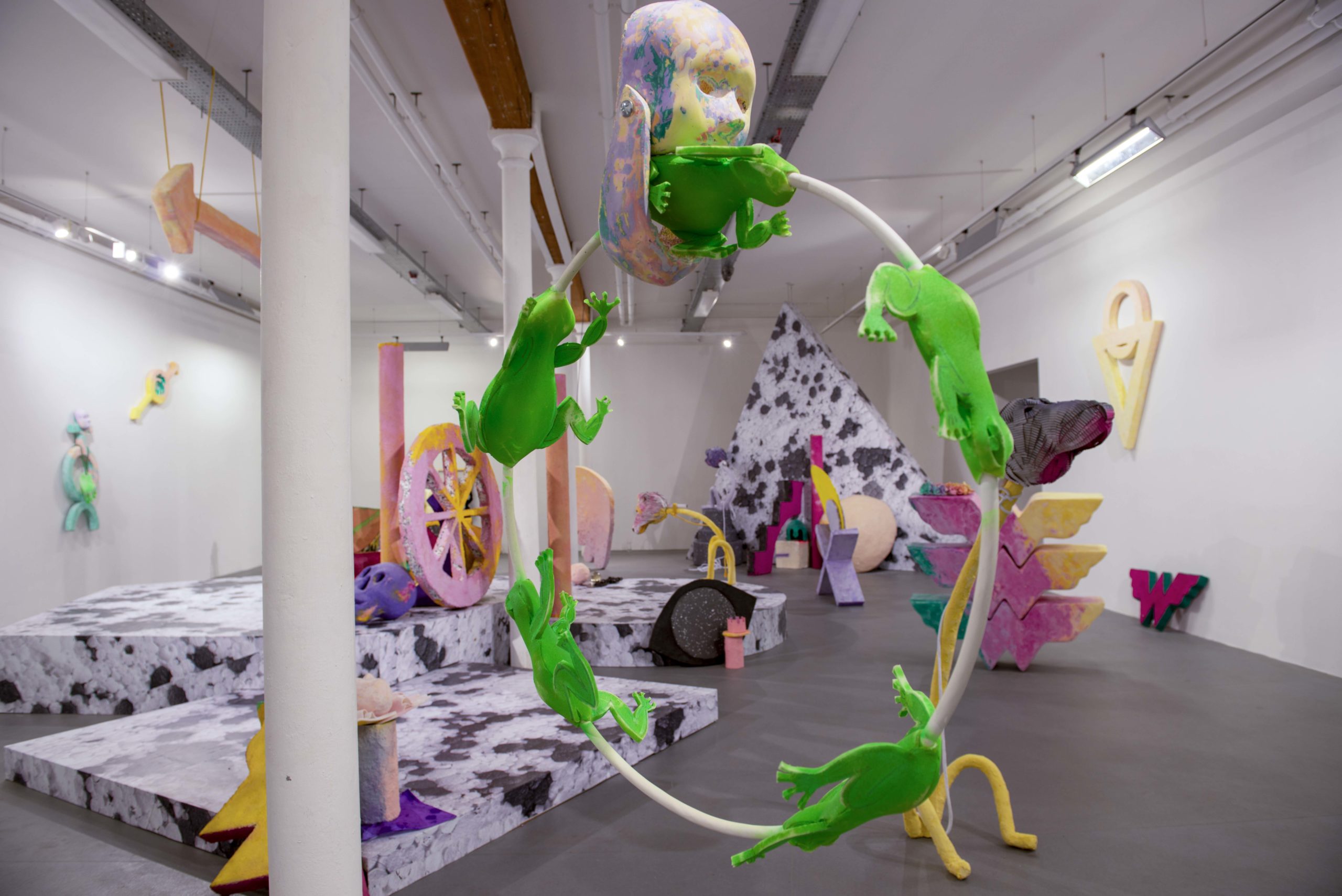 Command Lines is a theatrical installation of sculpture, performance and animation by artist Candida Powell-Williams. The works re-imagine the iconic tarot as a three-dimensional experiment in symbolism, action, story-telling and magical thinking. Powell-William’s installation uses the term Command Lines to frame the exhibition, insinuating systems, networks and feedback loops, control over and order of information. Her work builds on the play between performance, technology and sculptures that act as props to her fantastical stage setting, calling into questions structures of reality.

Throughout the gallery there is a multitude of scales and forms of sculptures that determine how we interact with the works. At the centre point of the exhibition there are colourful stationary sculptural forms that are a chaotic shambles apparently poised, ready for action; the space punctuated with enlarged heavy, stationary symbols.

This main body of work acts as an anchor that feeds back and circumnavigates the works in the adjoining gallery spaces.

There are miniature scale versions of the same forms, ordered in 10 dioramas arranged as a Celtic cross tarot spread. The viewer is invited to peer into each proscenium discovering abstract forms, empty castles and temple-like structures, animal heads and frozen magician’s gloves. The tarot is stripped of its archetypal human imagery leaving a space to fill and pushing the symbolic to the fore.

An interactive ‘game’, answering the viewer’s question with a series of animations derived from the performance and accompanied by a poetic voice; these vignettes mix ballet and computing terminology which, rather than giving divinatory guidance, are in fact instructions for the performance. This leads the viewer back to the main gallery where the props and costumes are waiting, as though inviting the audience to pick them up and start configuring their own imaginative reading.

The elements of performance and the sculptural props repeat and mutate across the galleries. Block sculptural forms and symbols are echoed in different media (ceramics, Jesmonite, resin, embroidery, textiles, drawing, animation) and different scales (human size and miniature), flipping back and forth creating a repetitive, self-referential loop, experimenting with positive and negative space; past and present; stationary and moving; animate and inanimate; soft and hard. The range of materials and textures reference digital pixilated landscapes rendered in the physical with apparently dissolving edges, wobbly geometry and bear the intimacy of the handmade to explore the mutability of meaning as they come together in a cacophony of voices.

The project is a culmination of research and development during a residency at London’s Warburg Institute, exploring the endurance of esoteric ideas and the cultural heritage of tarot, archetypes and mutation of symbols. A longstanding interest in our attempts to navigate the ‘Absurd’ led Powell-William to consider mysticism within storytelling and its meeting point with the mundane materiality of objects.

Powell-Williams’ work is a response to researching the slippage that occurs between primary and secondary source material in relation to historical artefacts. By discarding the original source and reimagining objects as a product of their interpretation she explores the consequences of retelling history and how we construct identity through objects and memory. She manipulates historical narratives, plucking references from disparate eras, folding them into the present and condensing them into a singular experience.

Candida Powell-Williams graduated from the Royal College of Art, London in 2011 and the Slade School of Fine Art London in 2009. Her sculptural and performance works are a response to researching the slippage that occurs between primary and secondary source material, exploring the consequences of retelling history and how we construct identity through objects and memory. She was recently Artist in Residence at The Warburg Institute London. Selected exhibitions include: Lessness, still quorum, performance, Serpentine Galleries, London (2018); Boredom and its Acid Touch, Frieze Live, London (2017); Tongue Town, Museum of Modern Art, São Paulo (2017); Cache, Art Night Associate Programme, London (2017); Vernacular History of the Golden Rhubarb, Bosse & Baum Gallery, London (2017); PIC performance festival, Melbourne, Australia (2016); Coade’s Elixir-an occupation, Hayward Gallery, London (2014). Powell-William’s is the recipient of the 2018 Mother Art Prize with a group show at Mimosa House London (2019). Other awards include the Sainsbury Scholarship at the British School at Rome (2012-13), the Paris Residency at Cite Internationale des Arts, (2010), Eric and Jean Cass Sculpture Award (2010-2011). In 2019 common-editions published Powell-William’s 78 card tarot deck and artist book.

For more about Candida’s work please see her website.

As part of the preview of the exhibition there will be a performance choreographed by the artist in collaboration with the Echo Echo Dance Theatre Company. Animating the sculptural forms the dancers will configure and reconfigure architectural structures found in the artist’s invented tarot cards. Set to meditation music and metamorphosing between each tableaux, dancers pierce and divide the space in a choreography inspired by spiritualist diagrams.

This exhibition is kindly supported by the Arts Council of England and The Warburg Institute.

Void Gallery is kindly supported by the Arts Council of Northern Ireland and Derry City and Strabane District Council with events sponsored by Northbound Brewery.

sonic arrangements in the infinite fill, a performance choreographed by Candida Powell-Williams is kindly supported by Derry Walls 400 and presented in partnership with the Siege Museum and Friends of the Derry Walls.