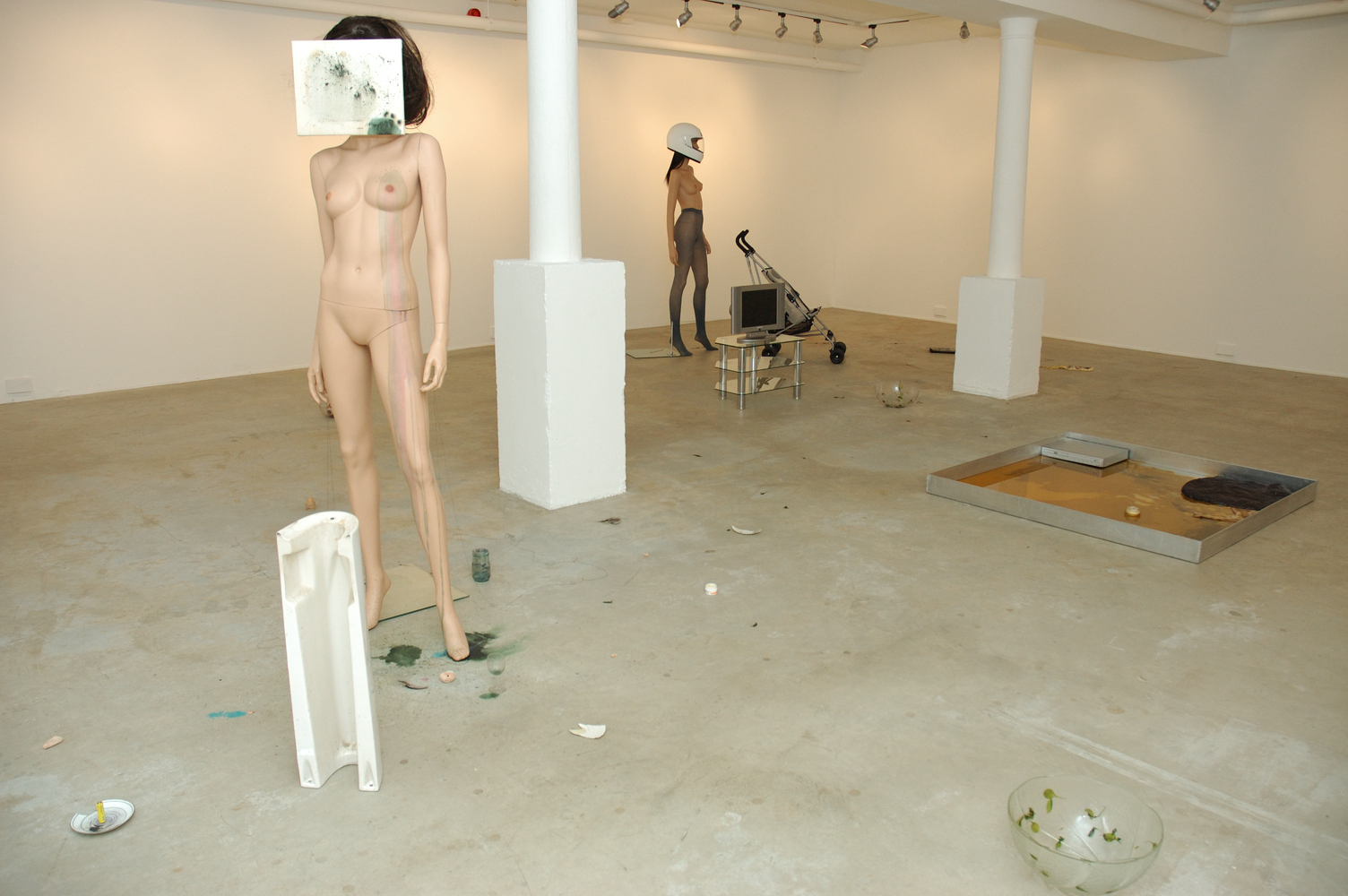 Since settling in Glasgow in 1985 when she was 19, Cathy Wilkes has been heavily involved in Glasgow’s artistic scene. She was a founding member of the Glasgow Women’s Library in 1988 and has been Director of the Wilkes Gallery (1994 -1997) and a member of collaborative partnership, Elizabeth Go (1997 – 2000).

Cathy’s practice includes sculpture, painting and writing as well as creating detailed installations that combine each of these artistic elements. Descriptions of her work could easily become lost in describing the individual parts contained within it as Cathy creates work where no one specific object is given more significance than the other.

‘Wilkes’ works, suspended as they are between sculpture in its traditional sense and utilitarian, functional objects, articulate the artist’s concern with the elusive relation we establish with the world and with the things in it; a quest which, with the body as the inevitable and indefinite battleground, is as intuitive as it is intellectual. Wilkes’ specifically non–compositional, narrative–resistant installations thus form exceedingly hermetic, rarefied systems of discrete yet inseparable elements, in which the understanding of the whole is subjected to the singularity of perception. In their self–conscious but stubborn volatility, their outrageously quiet determinedness, they gesture not only to the insufficiency of language as a relay to the sensory realms of the body, but also to the extra–linguistic and essentially erotic dimension of artistic activity. Paradoxically, however, this doesn’t lead to a closing down of language, to its deliberate numbing. On the contrary, these mannered configurations only really spring into being through an unexpected opening out, unintended and uncalled for; summoning an embodied response, making that fatal jolt, and keeping up with the struggle to communicate meaning, primarily between the work and the artist herself, and then with the world at large’

‘Wilkes proposes a reconfiguration of the feminine sphere as autonomous and resistant to commodification. Central to the feminine sphere is the notion of invisible labour, present in all aspects of everyday life yet kept outside of the systems of material and symbolic gratification. Wilkes’ articulates her interest in invisible labour not by simply acknowledging it (by making it visible), but by incorporating it (making it double invisible). The invisible labour, with its cycles of repetition, thus turns into the structuring principle of her practice which is almost impossible to consider as a succession of separate works, rather than as a totality in which individual objects are treated as processes, provided with time to reach their proper form. In every new installation Wilkes’ repeats elements and ideas from previous ones, constantly taking away the old and adding the new. In that sense, her installations are in a state of perpetual change in which repetition relates more to the biological rather than to the industrial’

Cathy Wilkes (b. 1966, Dundonald, Belfast, lives and works in Glasgow, UK) graduated with a BA from The Glasgow School of Art in 1988, and completed her MFA at the University of Ulster, Belfast in 1992.

Wilkes has produced an outstanding and unique body of work spanning 25 years, she is widely acknowledged as one of the most influential artists working in the UK today. She will represent Britain at the 58th International Art Exhibition – La Biennale di Venezia in 2019.

In 2016, she was the inaugural recipient of the Maria Lassnig Prize and presented the largest solo exhibition of her work to date at MoMA PS1, New York (2017-2018).

Wilkes was nominated for the Turner Prize in 2008. She represented Scotland in the 51st Venice Biennale in 2005 as part of the exhibition ‘Selective Memory’, and was featured in ‘The Encyclopedic Palace’, the 55th Venice Biennale’s central exhibition in 2013.