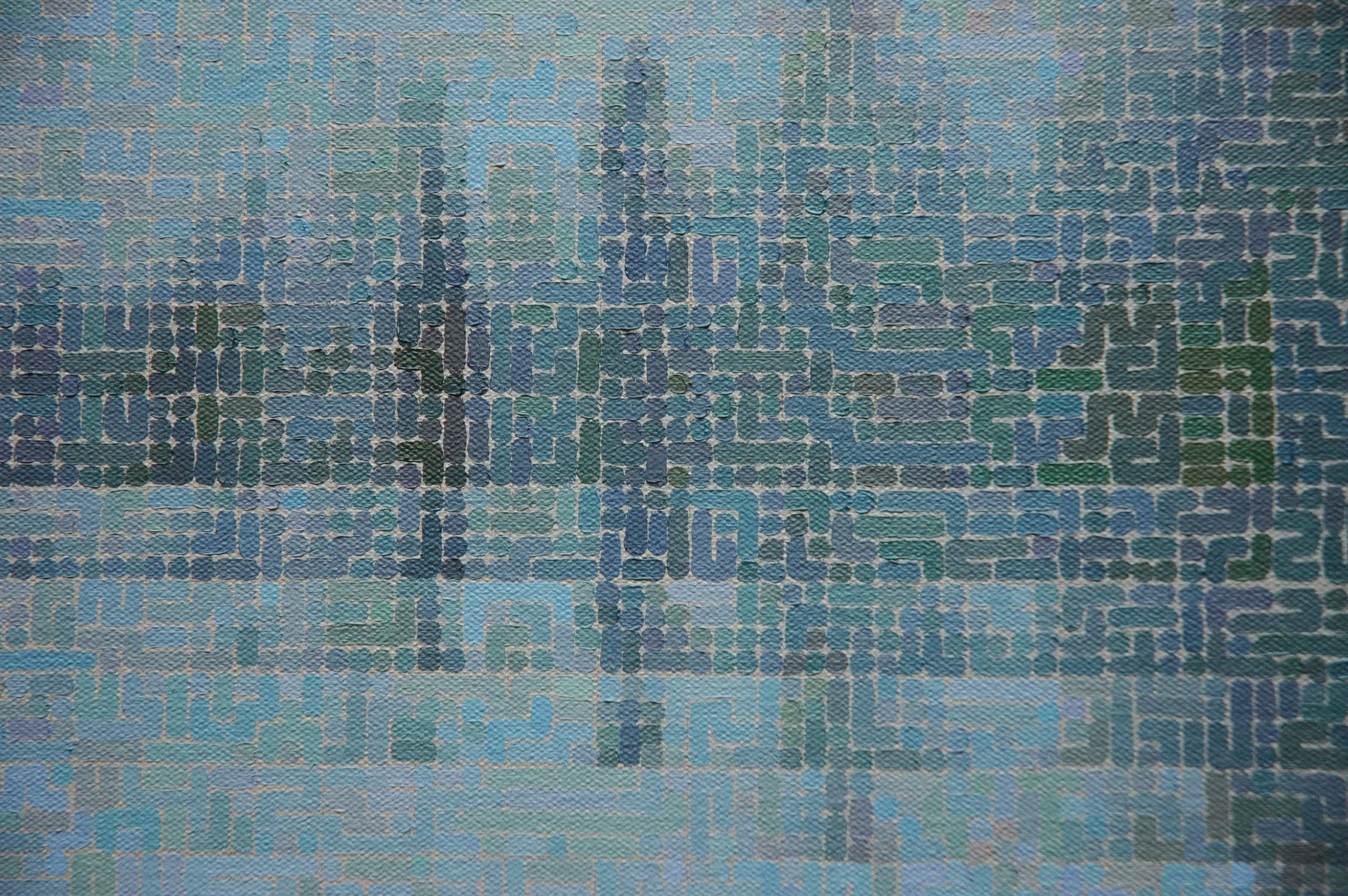 Void was delighted to present Deliverance, a solo exhibition by Dan Hays.

In 1999 Dan Hays discovered an alternative Dan Hays through an Internet search, living in Colorado, U.S.A. His website consists of numerous photographs of the Rocky Mountain landscape surrounding his home, as well as a live web-cam. With his permission a series of oil paintings derived from this imagery was embarked on, exploring the distortions of low-resolution digital images. Collectively titled Colorado Impressions, associations were made with the intentions of Impressionist painting and the mechanics of digital image compression down to the pixel level. An interest in the immateriality of digitised imagery and the screen, combined with painting’s traditional focus on the paradox of representing light in solid pigment is at the core of Hays’ work. Taking hundreds of hours to produce, robotically working from computer print outs and projections, these meticulous and mediated reproductions of low quality images are necessarily flawed, reclaiming fragments from the infinity of digital photographs on the Internet. Visual material is now collected from across the whole of Colorado. It is essential to the project that Dan has never physically visited; receiving all his pictorial information over the Internet of what has become a mythic place for him.

The portentous title Deliverance has a few associations with the Colorado Impressions project as a whole and the six paintings brought together for this exhibition at Void in particular. There is the 1970’s film of the same name, where four men set out on a canoe trip in the American wilderness. The dream of getting back to nature is somewhat frustrated by events in the backwoods, their romantic idea of nature shattered. A particular scene in the film has a fabulously unreal day-for-night sequence, where the actor Jon Voight climbs the gorge rock-face to the landscape above. Playing with photographic exposure to represent different times of day links to three new paintings, Colorado Impressions 16a, 16b & 16c, derived from a single photograph of a silhouetted pine forest. The simple form of a sun or moon has been superimposed over an image largely made up of digital noise. Here notions of the sublime, and a reverence for the Hudson River school painters of the 19th century, are glimpsed through a heavily filtered and crudely reconstituted web-cam picture. Two further works in the show, Dan Hays and Self-Portrait were painted in tandem, reproducing a photographic self-portrait that Colorado Dan sent in 2001. They are identical in terms of application of paint, except that they are mirror images. Questions of authorship, authenticity and uniqueness are touched on, echoed by the other works in the exhibition, where mirroring and multiplication are the dominant formal concerns. Here the title Deliverance connects playfully with both the tortuously robotic process of reproducing pixels and the mirrored existential trap presented by all the paintings.

Dan Hays is a British Postwar & Contemporary painter who was born in 1966. Their work is currently being shown at multiple venues like Hospice Saint Roch Museum in Issoudun. Numerous key galleries and museums such as Saatchi Gallery have featured Dan Hays’s work in the past.Dan Hays’s work has been offered at auction multiple times, with realized prices ranging from $1,384 USD to $9,038 USD, depending on the size and medium of the artwork. Since 2003 the record price for this artist at auction is $9,038 USD for SEPARATION, sold at Sotheby’s Olympia in 2007. Dan Hays has been featured in articles for ArtDaily, Saatchi Online and The Village Voice. The most recent article is Dementia and Art: Making a Positive Connectionwritten for BBC News in September 2019.