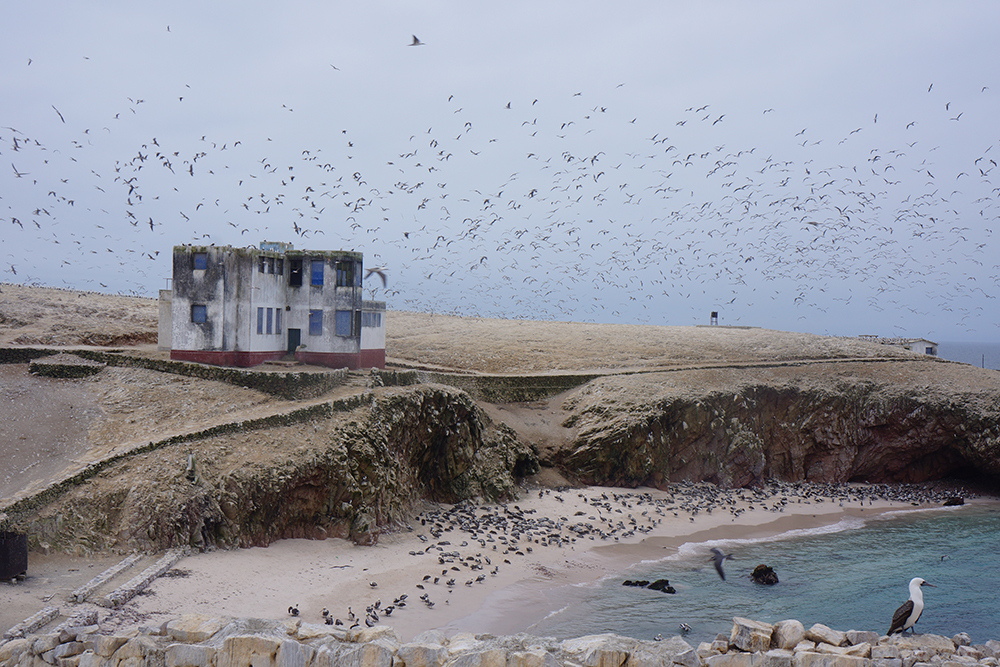 Dinh Q Lê’s work for The Colony features newly filmed footage of the Chincha Islands off the coast of Peru which are inhabited by large colonies of birds and are rich in guano – a powerful fertiliser. Currently these islands are uninhabited but during the mid 19th Century the Chincha Islands were central to global markets and contested by Spanish, American, and Peruvian powers in order to lay claim to what was then one of the most valuable global commodities. At the height of the ‘Guano Rush’ thousands of bonded Chinese labourers were forced to live on these islands in brutal conditions to harvest the fertiliser. The United States passed the Guano Act in 1856 and Spain and Peru went to war from 1864-1866 because of the Chincha Islands. By revisiting 19th Century imperialism and colonial economic disputes, The Colony also poses questions in relation to contemporary conflicts over mineral exploitation. In the accompanying catalogue, in which Dinh Q. Lê is joined in conversation with Zoe Butt, they also discusses this project in relation to the current political instability over the contested islands in the South China Seas taking place between Vietnam and its larger neighbour China.

Dinh Q. Lê was born in Vietnam and immigrated to the US at the age of ten to escape the Khmer Rouge. Lê consistently challenges how our memories are recalled with context in contemporary life; he is known for his large-scale photo-montages, where he weaves photographic strips into a tapestry of images that revolve around the theme of the Vietnam War. Lê’s important works document the unheard stories of survivors who endured the first helicopter war. He utilises the artistic process as a tool for examining and unearthing history, exploring the universal themes of loss and redemption. Through his work, he merges Eastern and Western cultures, as well as personal and fictional realities. Lê received his BA in Art Studio at UC Santa Barbara in 1989 and his MFA in Photography and Related Media at The School of Visual Arts in New York City in 1992.

He has exhibited all over the world, including the Houston Center for Photography; the Los Angeles Center for Photographic Studies; the Speed Art Museum, Kentucky; A major survey of his work A Tapestry of Memories: The Art of Dinh Q. Le was held at Bellevue Arts Museum, WA. His work is in the collections of Museum of Modern Art, New York; San Francisco Museum of Modern Art; The Hammer Museum, Los Angeles; The Los Angeles County Museum of Art; Portland Art Museum; The Bronx Museum, New York and The Israel Museum, amongst others. Besides being an artist, Lê also co-founded the Vietnam Foundation for the Arts (VNFA), based between Los Angeles and Ho Chi Minh City–an organization that supports Vietnamese artists and promotes artistic exchange between cultural workers from Vietnam and around the world. With funding from VNFA, Lê and three other artists co-founded San Art, the first not-for-profit contemporary art space and reading room in Ho Chi Minh City. He is currently a member of the peer committee for Art Network Asia and a member of the Asia Society’s international council. He is the recipient of several awards: The Prince Claus Fund Award (2010), Gunk Foundation Public Project Grant (1998), The Dupont Fellowship (1994), NEA Fellowship in Photography (1994) and The Aaron Siskind Fellowship (1992).

Environmental historian Frank Uekotter from the University of Birmingham launched the exhibition on Saturday 14 May at 6.30pm with a talk based on the legacy of Guano.

For more about Ikon Gallery please visit their website.

For more about ArtAngel and this project please visit their website.

The Colony is part of The Artangel Collection – an initiative to bring outstanding film and video works commissioned and produced by Artangel – to galleries and museums across the UK. The Artangel Collection has been developed in partnership with Tate, is generously supported by the Esmée Fairbairn Foundation and The Foyle Foundation and uses public funding from Arts Council England. The Colony has been commissioned by Art Angel and Ikon Gallery in association with Han Nefkens H+F Collection and Proyecto Amil, Lima and with the support of the Arts Council England, and Artangel International Circle.

Artangel is generously supported by Arts Council England and the private patronage of the Artangel International Circle, Special Angels, and The Company of Angels.