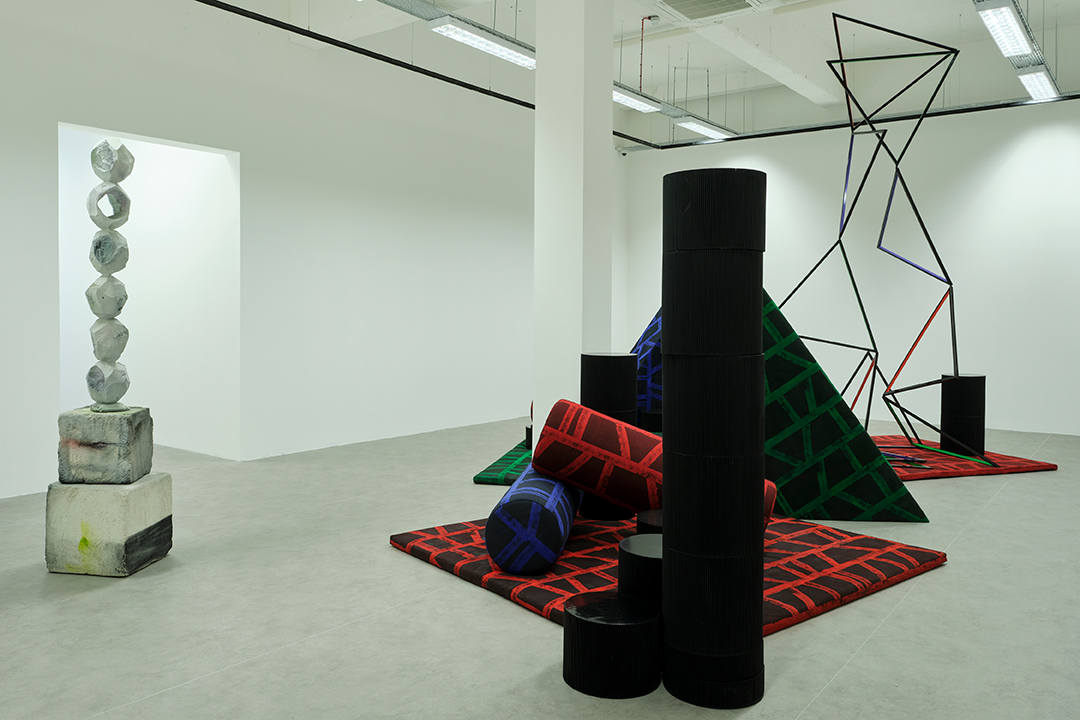 The Shrinking Universe consists of individual works made up of multiple elements. Each sculpture retains its own distinct presence while forming a cohesive totality. The array of materials that Rothschild uses in her work, alongside the distinction between the presence of the artist’s hand and industrially created works, brings about a tension between the monumental and the personal.

Through her diverse use of materials and sculptural formats, Rothschild constructs a sculptural and immersive environment that allows the public to be both viewer and participant. Rothschild’s exhibition creates a socially sculptural space, allowing for contemplation of the material legacy of both present and past civilisations.

One of the leading sculptors of her generation, Eva Rothschild’s practice demonstrates a great awareness of the modernist tradition while maintaining its own distinctive sculptural language. Her works also engage with objects from the surrounding urban environment that she lives and works in, and the eternal forms of geometry and classicism. Her sense of materials, scale, monumentality, colour and line reflect a refined aesthetic sensibility that redeploys and subverts familiar sculptural formats.

Rothschild’s works are dynamically active, unapologetically monumental and bold. Expanding on the artistic lexicon of process, form, scale and materiality, Rothschild creates her own unique sculptural language. The Shrinking Universe is an invitation to look, to be attentive to your surroundings and most of all to be present with the work.

The Irish presentation of Ireland at Venice was supported by the Arts Council as part of its commitment to promote the visual arts to Irish audiences and by Dublin Port.

Eva Rothschild was born in Dublin in 1971 and lives and works in London. She has undertaken largescale commissions for Tate Britain’s Duveen Galleries (2009) and Public Art Fund, New York (2011). Her work has been the subject of solo exhibitions at The Australian Centre for Contemporary Art, Melbourne (2018); The New Art Gallery, Walsall (2016-17); The Hugh Lane, Dublin (2014); Nasher Sculpture Centre, Dallas (2012); Kunstverein Hannover, Hanover (2011); South London Gallery, London (2007); and the Kunstalle Zürich, Zürich (2004). Rothschild’s 2011 solo Hot Touch was the inaugural exhibition at The Hepworth Wakefield, Wakefield. In 2014 Rothschild was elected Royal Academician by the Royal Academy, London.

Mary Cremin is the Director of Void Gallery, Derry. Prior to this, she was Programme Curator of Temple Bar Gallery + Studios, Co-Artistic Director of The Treeline Project and Project Curator at the Irish Museum of Modern Art. Cremin has worked with artists including Derek Jarman, Douglas Gordon, Rosa Barba, Johan Grimonprez and Kader Attia Void commissioned the Turner Prize winning film The Long Note by Helen Cammock,  other co-commissions include Ima Abasi Okon, Alex Cecchetti. She has produced large-scale exhibitions and commissions such as Eileen Gray, (2013), Richard Mosse, The Enclave, Irish Pavilion, Venice Biennale, (2013). Cremin has written for exhibition catalogues and artists books, and is a member of the International Association of Curators of Contemporary Art