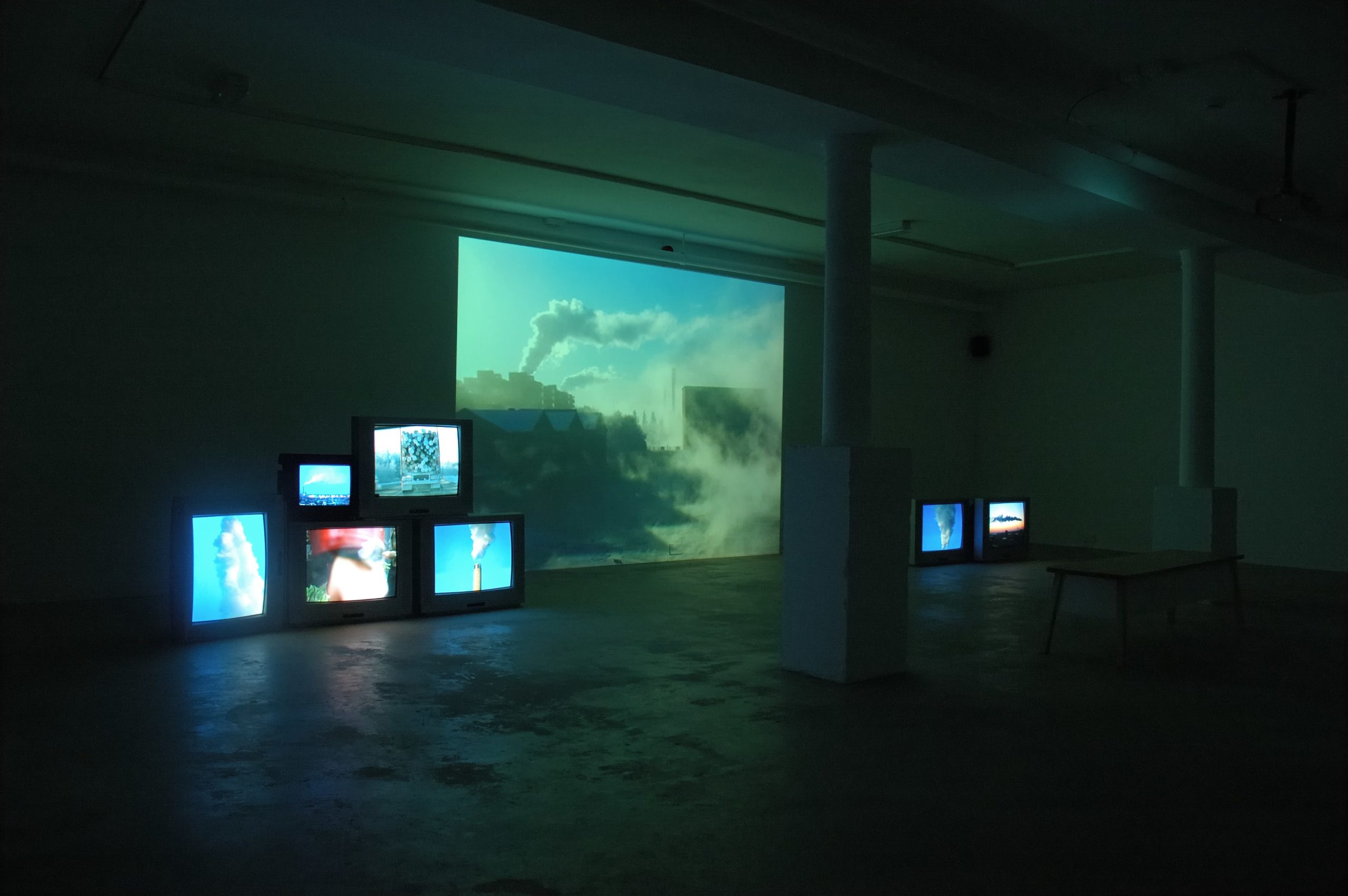 Void’s exhibition Less crushing a blow, was a video and sound installation by Dublin based artist Finola Jones. The exhibition was a work specifically created for Void and featured the artist’s on-going explorations of the interlacing patterns of video monitor screens, projections and overlaid sound.

Jones is an inveterate traveller and her footage is acquired from disparate locations; Australia to Finland, from the (apparently) tropical sub-aqua to the freezing of air and water. The combination is not only extremely elemental but also very human, as the sublime awe of nature is brought right back down to size by human presence and other challenging interventions. Both scale, and lens-based verities are challenged and the viewer is enthralled whilst simultaneously thrown. The viewer is made continuously aware that they are being visually and emotionally manipulated, and yet are so enchanted by what they see that they continue to buy into the confidence trick – whatever it is, exactly, remains uncertain, but certain in the knowledge that there is one.

In the large projected DVD work; Steam, (2007) the sublime visual beauty of the freezing river and glowing back-lit billowing smoke/steam stack is heart-wrenchingly underscored by an equally sublime – but half broken by age – rendition of Bellini’s La Sonnambula. The only visible signs of life in Steam are birds, these dots in the landscape provide the only markers of scale.  Scattered around the space are further re-iterational images of belching chimneys, some sideways some upside-down, making it appear that the smoke/steam is flowing like a river. The viewer remains uncertain as to the status and meaning of these ambiguous images, they have their own beauty, but are they contributing to the global warming of the planet or are they indeed themselves innocent steam victims of the extreme cold?

Furthering the complexity, another screen shows footage shot from a moving car, once again set in ‘the freezing north’, however this time we are following a truck loaded with neatly trimmed logs. There is a feeling of a chase movie here, or at least some form of documentary about illegal logging. The attention of the camera is momentarily caught by yet more chimneys belching smoke, the viewer is surrounded.

Gallery Two featured the second projected work; Aquarium, (2005-7) this piece was also accompanied with its own emotive soundtrack – which itself filters through to the other room mingling with Bellini’s La Sonnambula. Aquarium is loaded with intentionally misleading signals, initially the viewer feels that they are looking at an enlargement of an oversized domestic or restaurant aquarium complete with cute baby sharks or the black foreground possibly being mistaken for ‘black banding’ that occurs whilst screening ‘widescreen’ format. Suddenly however, coach loads of tourists enter and transgressively inhabit the banded ‘non-space’ at the base of both the projected image and in front of the aquarium….the penny drops. It becomes apparent that the camera is situated in a darkened room, filming a monstrously large glass-screened tank, containing enormous fish. Tourists pose in front of the glass, and photographic flashes go off, timed to illuminate the poser whilst freezing a moment in time (usually as a three-meter long shark passes behind the subject’s head) The raw quality of the footage also tells us that this is something the artist stumbled upon almost by accident as the footage has been recorded on a relatively low-resolution video camera. Jones has then consciously pushed this idea to near breaking-point by the works final near-cinema scale.  The accompanying music Le Carnaval des Animaux’ emphasized the epic nature of the ‘drama’, or maybe ‘fiction’ is the correct word.

One more layered meaning of the projection was further brought into question by an accompanying floor-situated monitor piece.  A cat slumbers in the sunlight, a light reminiscent of that which is artificially generated as a dappled, flittered ‘lighting effect’ in Aquarium.  A real breeze gentle ruffles the cat’s fur, but curiously this makes us think more of the feat of animation, which commonly mimics this effect in just about every digitally generated animation feature known to man. The warmth of ‘real’ light contrasts with the chill of the artificial deep, but there is an artifice here too – as there is almost everywhere with Jones’ installations – in that the simple slumbering cat has been filmed twice and is ‘divided up’, in the manner of an Abel Gance filmic device, onto two separate screens, acting independently.  The sleeping cat becomes gate-keeper, wherein the two halves of himself facilitates a capacity to work endless shifts.  There is no escape from the watchful eye that will never open.

Jones creates site specific sculptural installations that explore the concept of cultural kitsch and examine cultural difference and similarity. A guest lecturer at the Sydney College for the Arts, University of Sydney from 1994-1996 and at the National College of Art and Design, she holds dual citizenship with Ireland and Australia. She has been involved with a considerable number of art committees including the Board of Directors of the Sculptors’ Society of Ireland from 1991-1994, an assistant director at the Kerlin Gallery, Dublin, 1991,co-founder and committee member of ‘Random Access’, a multi-phased investigation into conceptually based art from 1992-1993 and a curator for the exhibition ‘In Search of Experience: Reconsidering the Readymade’ at the Green on Red Gallery, February 2000. Married to painter David Godbold, Jones has exhibited extensively in solo, group and collaborative projects through out Ireland and abroad.

Find more about her here.