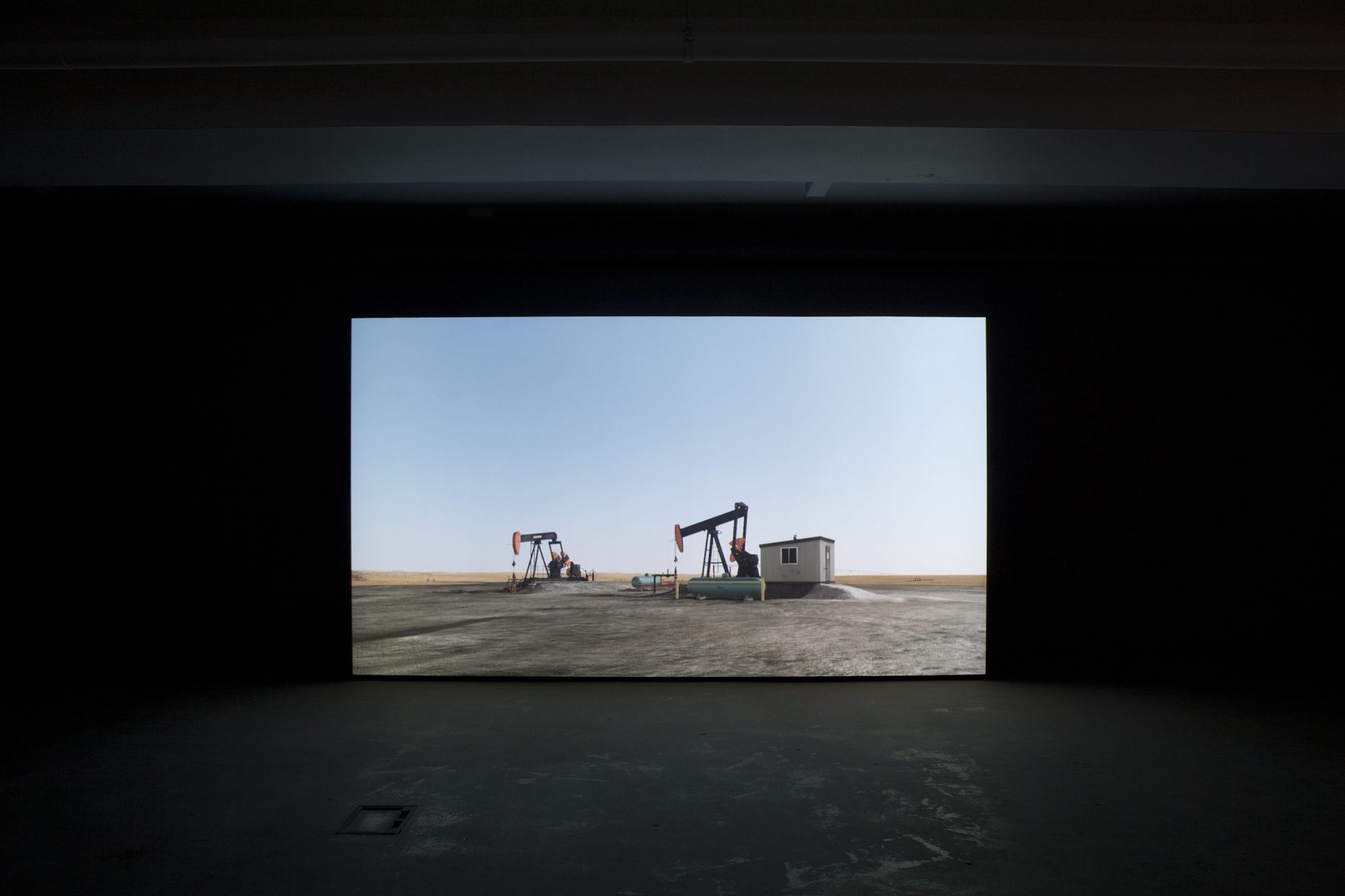 The exhibition consisted of Sow Farm (Near Libbey, Oklahoma), 2009, a screen-based work depicting a vast and unmanned, computer-controlled animal farming facility, and Universal (Near Iron Springs, Alberta), 2011, a high-resolution projection, which centres on a pair of oil derricks situated in the Canadian landscape near Calgary. Universal takes its title from the name of the firm that installed the derrick and which can be found emblazoned on the arms of the machines. Universal extends Gerrard’s Animated Scene series, with its strong emphasis on exchanges of power and energy, and last shown at the Venice Biennale in 2009.

A quick glimpse at the credits associated with each work hints at the provenance of these complex works. These are not videos but digitally created simulations existing in real time. Based on existing landscapes and structures, Gerrard and his team – based in Vienna – meticulously photograph and survey their chosen landscape before creating highly detailed models and animating them in virtual space. In the modelling of these works, consideration is given to conditions at the location such as light, seasons and weather systems. This allows the works to shift and change, like the real world, over a 24-hour period and in a 365-day year.

Despite the real time 3D game design technologies used to create these works Gerrard’s practice remains deeply rooted in the tradition of landscape painting and land art. These beautiful, compelling and uncanny landscapes explore the relationship between land and capital. Gerrard successfully uses the medium as a tool to say what he wants to say rather than speaking about the technology itself – as is so often the case in media-based art.

Gerrard was drawn to the two oil derricks depicted in Universal by “the strange symmetry of the derricks set in a t-square”. He “liked that the machines stand in a mowed corn field, complete with classic radial irrigation system”. Such lyrical observations underpin simulations that draw the viewer in to a deeply connected meditation on our dependence on oil and intensively farmed food. The derrick draws oil from the ground, which is used to fix nitrogen and enable the intensive farming of corn, which feeds the animals housed in the impenetrable facilities depicted in Sow Farm. The unsustainable pressure of the market is frighteningly evident in these simulated landscapes of the North American Plains.

Gerrard was born in Dublin in 1974 and he works between Vienna and Dublin. He received a BFA from The Ruskin School of Drawing and Fine Art at Oxford University and an MFA from the School of the Art Institute in Chicago. In 2002 he was awarded a Pépinières Residency at Ars Electronica, Linz, where he developed his first works in Realtime 3D.

In addition to the exhibition at the Void, Gerrard currently has solo shows at Perth Institute of Contemporary Arts, Australia and Ivorypress, Madrid. Oil Stick Work, a major long-term public projection for Art on the Underground, is currently on view at Canary Wharf underground station in London for a full solar year, until May 2011.

For more about John’s work please visit his website.

Universal is supported by Ilex and courtesy of Thomas Dane Gallery.