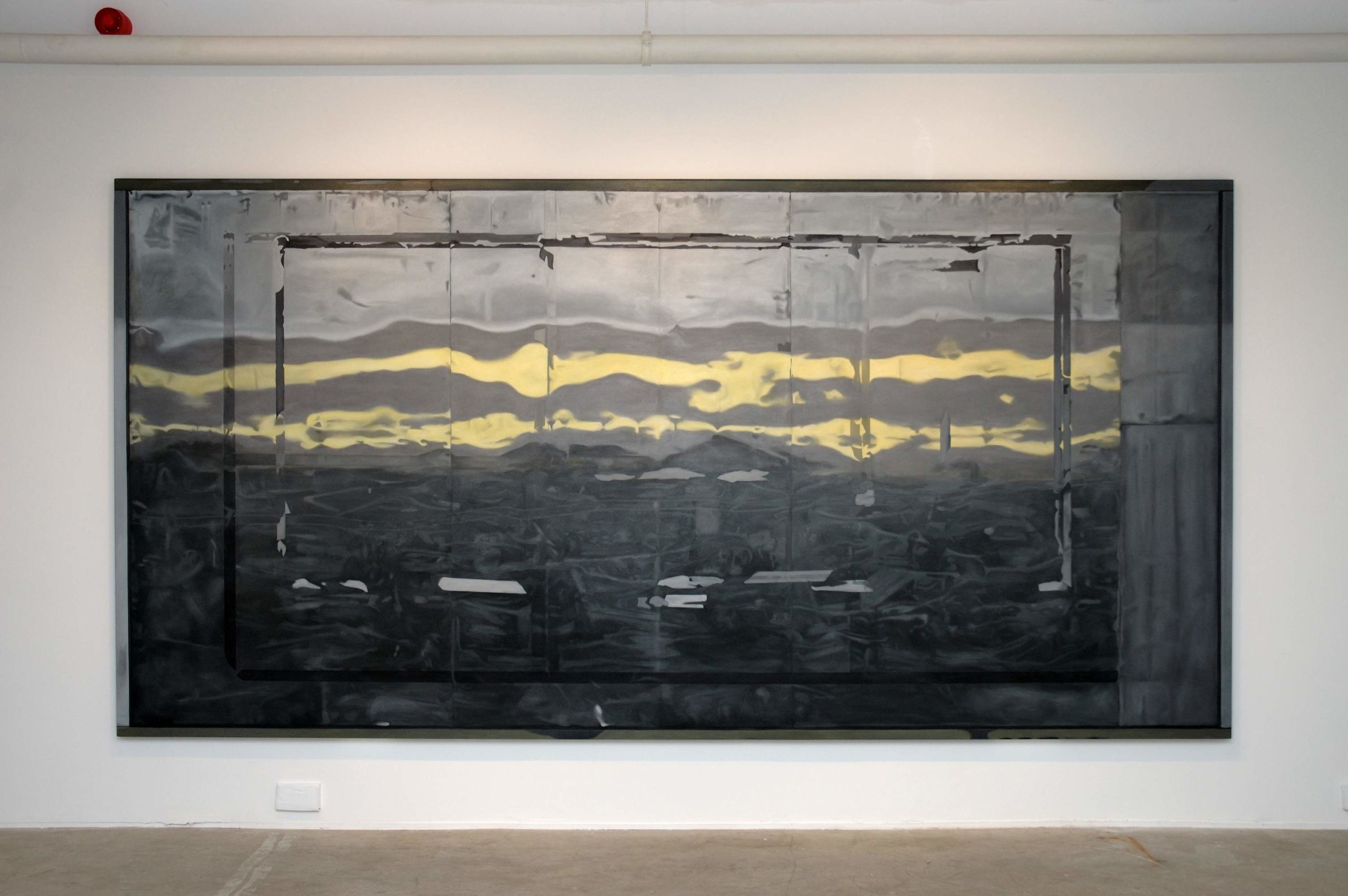 Void was delighted to host the solo exhibition The Fear Of All Sums – Ten Million Dice to Weigh by Derry born artist Padraig Timoney.

Some thoughts towards a Statement by Padraig Timoney, 2006

The works gathered, then strewn around the Void are from the last few years mostly. Visual surfaces get played with. They open into illusion, flip flop back and forth between virtual and material. This is nothing very new, this is what painting has done and photography and the eyes, the eyes.

A determined purpose is not the reason for this production- that’s the strange equation that still hasn’t been sorted out. Maybe- just to see what emerges. Having a self-invented theoretical backup to the works doesn’t impede or underwrite them, in fact it can be kept in reserve to balance the pea-hen of aestheticism and the millipede of dilettantism. But that’s a whole conversation that you first have to ‘get into’.

These things, I think, are not wearing any uniforms except those of their immediate material area, painting, photography, sculpture- their ‘slice’. If they’ve got logic and personality, that’s ok.

The english for ‘uniform’ is uniform. The Italian for ‘uniform’ is ‘divisa’, or divided. I’m thinking between the two. The Irish for ‘Go on!’ is ‘Scuán!’ and Cathal Coughlan sang “And by the way, get out just means get out to me”.

How too has sculpture changed in the urban context, do I learn about looking at lumps of material better on holiday, or on the detour, when the general is familiar and the specific extraordinary in the atmospheric conditions? When everything presents itself, not representing itself. Oh, international ‘terror’ threats invigorate global and local physical space in a way sculpture or installation can only dream of…

Trees are the usual burst of presence, if we get to go right around them at all. They are most strange when seen from a vehicle, moving or still. These days, the leaves are still green in December. Are the raw and worked materials we encounter always on their way to becoming something else, to disappearing into fixity? Damien Duffy said the pile of gravel was a ‘mound of margin’. I think dice dots was the right thing to spray on it for a start, maybe just a little rhetorical. Materially, it’s at least as old as the pyramids. Small objects abound in the everyday ‘commercial’ spaces around us, always going toward their purpose, I have met them coming at close of day…

Intentional, international, tiredness. Mush-rooms. Kicking against against results in absorbed foot. Dumb films, dumb music, donkey’s words on the telly. Attention span shattered, keep eye on the ball, don’t watch the shimmies. Pattern recognition. Make more ‘examples’, each a wave top in a sea, slow this down and it’s a peak from a range, each one sets its own terms and its own conclusions, with or without you. Simply said, I scratch my head to make my brain work better. Can’t help it, can’t see it.

At the core of Pádraig Timoney’s practice is an ongoing inquiry into the mechanics of image-making—each canvas represents its own investigation into the ways images are constructed, or reconstructed through painting. Resisting a singular style, Timoney’s works are instead united in approach; each painting aims to seamlessly connect a chosen image with both material and process. Often inventing new processes as a result, the works function as an index or record of decisions made, while reveling in the shortcomings in the medium itself. By including the errors of translation and the faultiness of recognition, abstraction and figuration never seem too far apart, often appearing on the verge of collapsing into one another. Through these divergent modes, his exhibitions in turn document a specific duration of time and research in the studio, rather than a traditional artistic thesis.