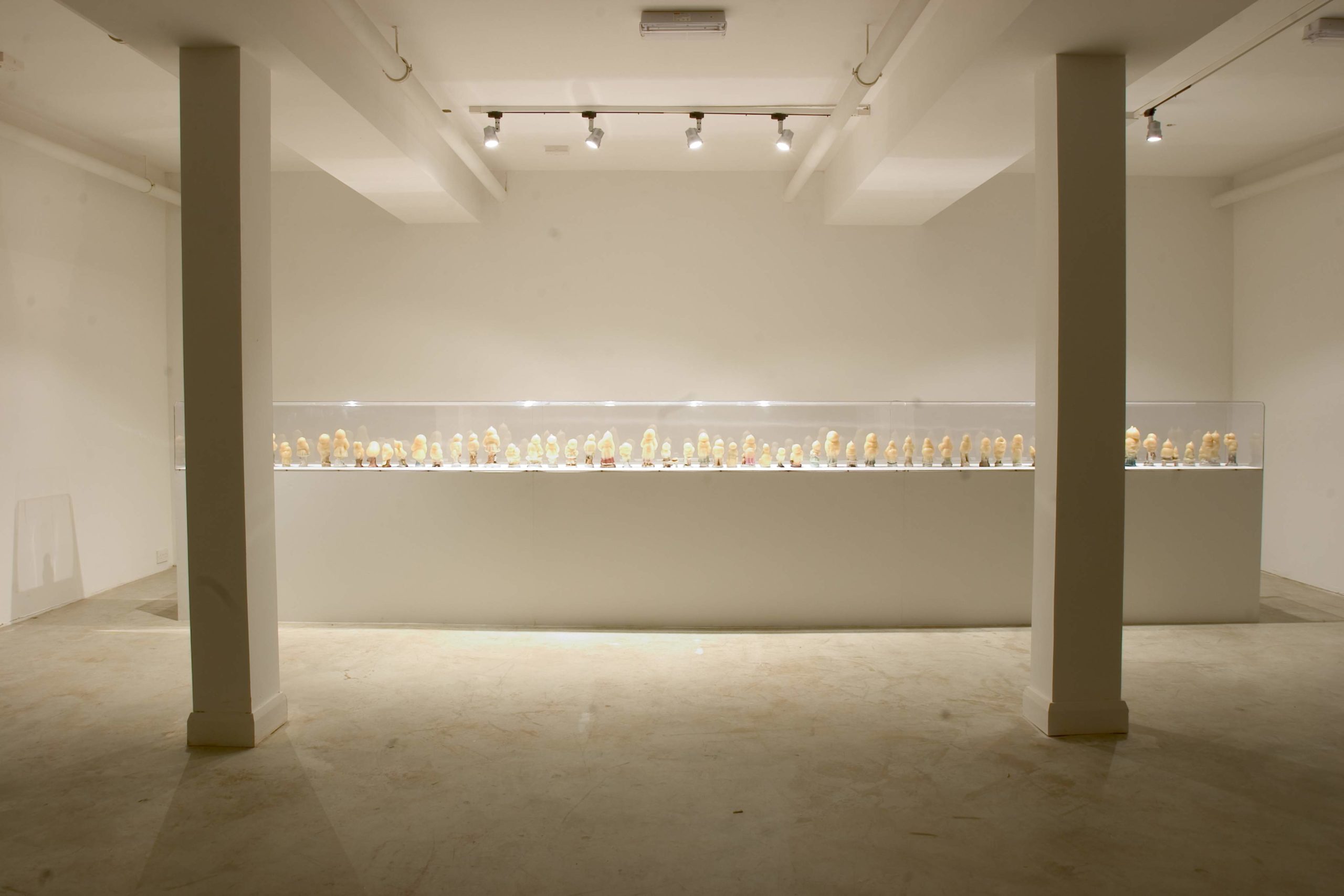 Ghazel is an Iranian artist, now living in Paris. Her three-monitor video installation, titled Me, consisted of a collection of short pieces, staged scenarios in which she acted out simple sketches which questioned the status of women in Iran and the country’s relationship with the USA.

Frances Hegarty exhibited two video installation pieces. The work shown is Autoportrait, incorporating a video of the artist dancing to a frenetic crescendo, while from a single speaker comes her voice whispering her life story. Frances was born in the west of Ireland, but has lived in England for many years, where she has achieved a very high level of success.

Vong Phaophanit showed a series of small sculptures, which were made through repeatedly dipping ceramic ornaments into beeswax. The resultant pieces were both sinister and beautiful. Vong is originally from Laos, but has been living in London for some years. He was shortlisted for the Tate’s Turner Prize in 1993.

This work’s departure point is identity – my multiple imperfect identities, though it
has evolved into being more and more universal: The woman (Me) is now ‘just a human being’. In this work I do not intend to talk about myself only, i.e. an Iranian, a middle easterner, a woman. And if I use a woman (myself) it’s just because I am one. Through the pretext of autobiography, I try to portray a human (regardless of
gender and ethnic or racial background), in our world today.
The chador, that has become a mostly a graphical element and a link between the
scenes, is just a local color – much like the black humor that I use in my films.
The Me series is an ongoing series I started in 1997. 580 scenes (15 hours) have
been made until now.

Find more about her work here.

Historically my work has been concerned with the issue of how the body as a
complex subject is constituted simultaneously through post-colonial discourse and
subjective realities. I often use narrative accounts not to construct a singular point of view, but rather in an attempt to disrupt the canon and create alternative histories. At times this is the discourse of the hysteric, the simultaneous acceptance and refusal of the role of the feminine subject. I have an interest in being within the moment of the real time of the work. However, in a world of competing discourses in which ‘being’ is problematised and provisional, I began to feel my actual live presence was not necessary to the wider issues of the work. I realised that performance too was a construct; what I selected and attempted to represent was not identical to the initial experience. It employed devices which reproduced the effects of authenticity but this representation was already mimicry, embodying repetitions and meanings already established in the specific bodies of knowledge and histories of postmodernity. As I became more uncomfortable with being the focus of the gaze in the live event, the recorded video image appeared to offer another type of control; allowing me to shift between being myself and performing myself and opening up another way of telling. The masquerade responds to fantasy, not desire. It becomes performance and anyone can playlimitate woman by conforming to the social construction of the feminine. It is a veiling of the lack and we have no alternative but to engage in the performance of a woman. Just as Freud observed that no man escapes castration anxiety, Luce Irigaray suggests that no woman escapes her beauty. From our earliest years beauty will be either attributed to us or denied us. If we don’t have it we hope to gain it and if we possess it we will certainly lose it. Female beauty is ultimately designed to attract the other to the self, it is never perceived as a manifestation of thought or interiority. It reduces us to a pure exteriority and the masquerade is involved with this construction of a female.

I was born in Laos, South East Asia, but left at the age of ten and was subsequently educated in France where I attended Art College. Immediately after graduating in 1985 I moved to Englandand have been a practising artist there for the past 18 years. In 1993 I became a British citizen.In the late 1980s and early 90s I produced a number of large-scale installation works using different media: lead, bamboo, rice, neon, rubber, domestic electric fans, slide projections and video projections in public galleries both in England and overseas. In earlier pieces, such as Fragments (1990) and Neon Rice Field (1993) the work played metaphorically and aesthetically to loosen set notions about cultural identity and play out a kind of free mediation between cultures. It deliberately confounded expectations and assumptions about its ‘meaning’ and cultural significations. These early juxtapositions of materials such as bamboo, rubber, rice and neon (all produced on a vast scale in SE Asia) worked to deconstruct these ciphers of an unspecified ‘East’ allowing them to shed their prescribed connotations and open out to new meanings. These works tried to show that you can never put an end to a material. Just as our own identities are shifting and unfixed so the identity of a material is mutable and open to new possibilities. Today my studio-based work embodies more a sense of cross-fertilisation than mediation. I try to leave it more and more open to hybrid forms and unexpected alchemy. I am fascinated by material and anything, anything at all, can be material for my work. This inclusiveness extends to absence: the absence of material can become part of a piece of work as with my ongoing series of ‘perforated objects’ I began perforating readymade objects which I drilled with a multitude of different sized holes, eventually transforming the object into a kind of shadow of its former self. What remains after this process is paradoxical: the objects remain recognisable despite the mass of their substance having been drilled away. I think these objects embody a kind of pathos: small cultural icons, stripped of their actual body but still managing to retain their significance. Recently the perforated series seems to be progressing from the melancholy of obsolescence to a process of literally puncturing the smooth imperviousness of consumer durables. They are opened up, exposed and rendered porous and vulnerable and yet at the same time the tyranny of their identity, sometimes even their branding, is still decipherable. In my work, I continually try to loosen reference – I am interested in cultural forms, but only so that I can unsettle them and tease their borders. The work in this show involves mass-produced collectible ornaments. These objects, acquired haphazardly over a period of years, are dipped repeatedly into baths of hot wax, building up layers until most of their original features are obscured, as if thickly veiled. These ‘stratified’ figurines become deformed in sometimes exquisite and at other times hideous ways. I think their identity becomes profoundly ambiguous and it is difficult to speak about them within the terms of the language available to us. It is this that fascinates me with these pieces – that they are so difficult to speak about.