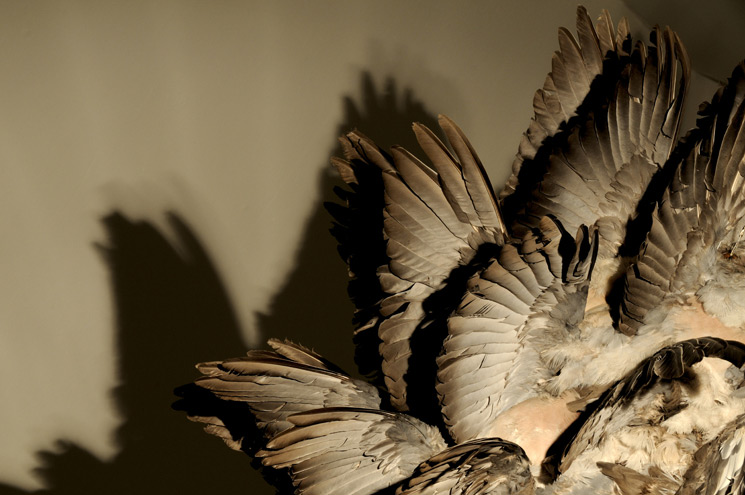 Having emerged on the London art scene just six years ago Polly Morgan has shot to fame and has quickly become one of the most important and collectable contemporary artists of her time.

Taxidermy is Morgan’s medium, a skill often associated with Victoriana prosperity, and the western view of human superiority over animals.

Morgan inverts these connections by disengaging the creatures she uses from their anthropomorphised associations. They are no longer trophies to adorn sumptuous interiors. Morgan gives them new life; a new narrative.

Reminiscent of relics, the works demand veneration. They are not macabre as expected but exquisitely beautiful and precious, preserved in a “SnowWhite-like” eternal state.

Interestingly, Morgan did not come through formal art school education but studied English at the Queen Mary University of London. A love of animals and the desire to preserve them led her to taxidermy in 2004 where she was instructed by renowned Scottish taxidermist George Jamieson. Since then Morgan has absorbed herself in the art of taxidermy, creating works that are highly sought after and owned by international collectors. Her works are part of Charles Saatchi’s collection and have been purchased by amateur enthusiasts such as Kate Moss and Courtney Love. Morgan has exhibited consistently in high profile galleries such as The White Cube and The Haunch of Venison.

Void is delighted to have eight of Polly Morgan’s works on show spanning from 2006-2010.

Polly Morgan (b.1980) is a British artist living and working in London. She is self-taught with no formal education in art and rose to attention after learning taxidermy in 2004 when she began to dismantle taxidermy traditions, creating unsettling still lives where the animal was observed in death rather than life. Recent works, making use of her model-making and painting skills, are illusory sculptures that combine taxidermy with cast objects and painted veneers and lie somewhere between figuration and abstraction.

Corset-like concrete and cast polystyrene structures struggle to contain snakes that contort and spill from openings, alluding to the distorting effect that social media has on our physical selves. In an age where our digital selves are experienced by more people than our physical selves, Morgan uses these rigid forms and painted veneers as a metaphor to examine our need to contain, control and conceal.

For more about Polly’s work please visit her website.

All works are courtesy of Polly Morgan, Haunch of Venison and Eyestorm.

Void Gallery is supported by the Arts Council of Northern Ireland and Derry City and Strabane District Council.