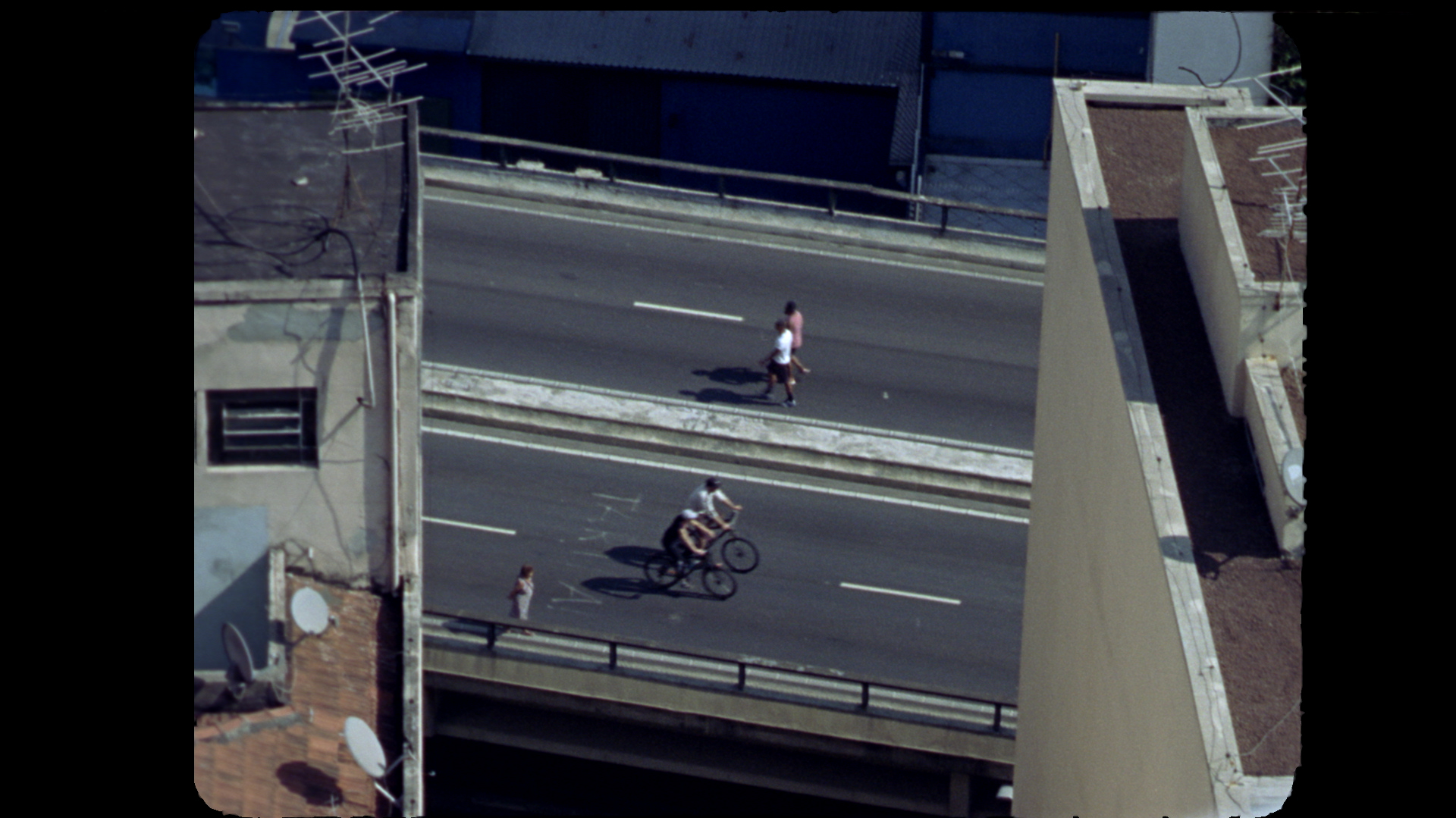 between objects in the waking world was a solo exhibition at Void Gallery in 2018 by artist Rosa Barba. Barba’s work situates itself within the realm of film and expands into sculptural forms through the exploration of the physicality of film itself and how that plays with light and spatiality. For this exhibition between objects in the waking world she exhibited filmic works that situate themselves between experimental documentary and fictional narratives.

Her films are located within specific geographic landscapes, whether man-made or natural, often times desolate locations not conducive to human habitation. In saying that there is a ‘psychogeographical’ element to these works through her study of the specific effect of the geographical environment on the behaviour and emotions of individuals. This is demonstrated in her films Outwardly from Earth’s Center (2007) and Disseminate and Hold (2016). Barba’s film works are fictions based within fiction, engaging with the tropes of documentary film making to create this sense of the real, and to immerse the viewer in multi-layered narratives. She is also engaged in this idea of film as a form of writing as can be seen in her piece Optic Ocean (2011) a printed film script exhibited alongside Somnium (2011).

Optic Ocean consists of a large, untreated canvas on which a text is printed in a double silkscreen print in red and cyan; the spotlight illuminates the text which gives the text a sense of movement which plays with the viewer’s vision. The text quotes a film script based on the first science-fiction narrative entitled “Somnium”, envisaged by the philosopher and optician Johannes Kepler – in which he demonstrated a parallelism.

Somnium is directly connected to Optic Ocean, as the text in the film script is influenced by the short story written by Kepler, published posthumously in 1634. Borrowing Kepler’s title in homage, she has drawn upon both his tale and his remarkable achievement in establishing a new ontology of vision. The story describes how the earth is viewed from the lunar surface and imagines the way of life of the inhabitants of the moon and its climatic conditions. In the film we see scenes of a desolate industrial port location as the narrator describes the constant construction of this new landscape. The location is in Rotterdam, a future harbour that will be in use by 2030 – claimed to be the largest land reclamation project in the world.  The minimal soundtrack by Jan St. Werner alongside the multiple narrations creates a surreal storyline that merges fact and fiction.

Outwardly from Earth’s Center is based on a fictional society who inhabit an island that is unstable and is drifting toward the North Pole. The narration of the film by experts lends weight to the situation, long aerial shots pan the landscape, highlighting its seclusion. In order for the society to survive they must work collectively to save their piece of land. Social cohesion is the overarching sentiment of the piece as well as highlighting the human condition of vulnerability in an unstable environment.

Continuing her exploration of landscape Disseminate and Hold is sited in the city landscape of São Paulo – a sprawling metropolis the film centres on an elevated highway that runs through the city. These highways were often associated with utopian visions of the future and an economic vibrancy. In the film we see a highway occupied by people and devoid of cars as the road is open only to pedestrians and cyclists on weekends and during the week on evenings. The road is named after the Minhocão (animal), a quasi-fictitious earthworm-like creature. Barba is interested in the relationship between the city, its architectural history and its politics. Returning to this notion that the environment of the city can have an emotional effect on the people – albeit it a subconscious one. Similarly, Tony Smith famously described an experience on the New Jersey Turnpike; “The road and much of the landscape was artificial,” he said, “and yet it couldn’t be called a work of art. On the other hand, it did something for me that art had never done. At first I didn’t know what it was, but its affect was to liberate me from many of the views I had about art. It seemed that there had been a reality there that had not had any expression in art.” That reality could not be described, Smith said; it was something one had to “experience”.

Barba’s observational technique permits us to be somewhat removed but also present in these landscapes. In each of these films there is a metanarrative that connects them, the sense that all that is present becomes the future’s past, archaeological remnants of times past.

“Rosa Barba’s work is a subtle interrogation into and co-option of industrial cinema-as-subject, via various kinds of what might be understood as ‘stagings’ – of ‘the local’, the non-actor, gesture, genre, information, expertise and authority, the mundane – and removals from a social realism within which they were observed, and which qualifies them as components of the work, to be framed, redesigned, represented. The effect of which her work contests and recasts truth and fiction, myth and reality, metaphor and material to a disorientating degree, which ultimately extends into a conceptual practice.” – Ian White, 2011

Barba’s work is part of numerous public collections and has been widely published, most recently, in the monographic books Rosa Barba: From Source to Poem (2017; published by Hatje Cantz) and Rosa Barba: The Color Out of Space (2016; published by MIT List Visual Arts Center/Dancing Foxes). Rosa Barba was awarded various prizes, amongst others the PIAC, International Prize for Contemporary Art, by the Prince Pierre de Monaco Foundation (2016).

For more about Rosa’s work please visit her website.

This exhibition was kindly supported by the Goethe-Institut London.