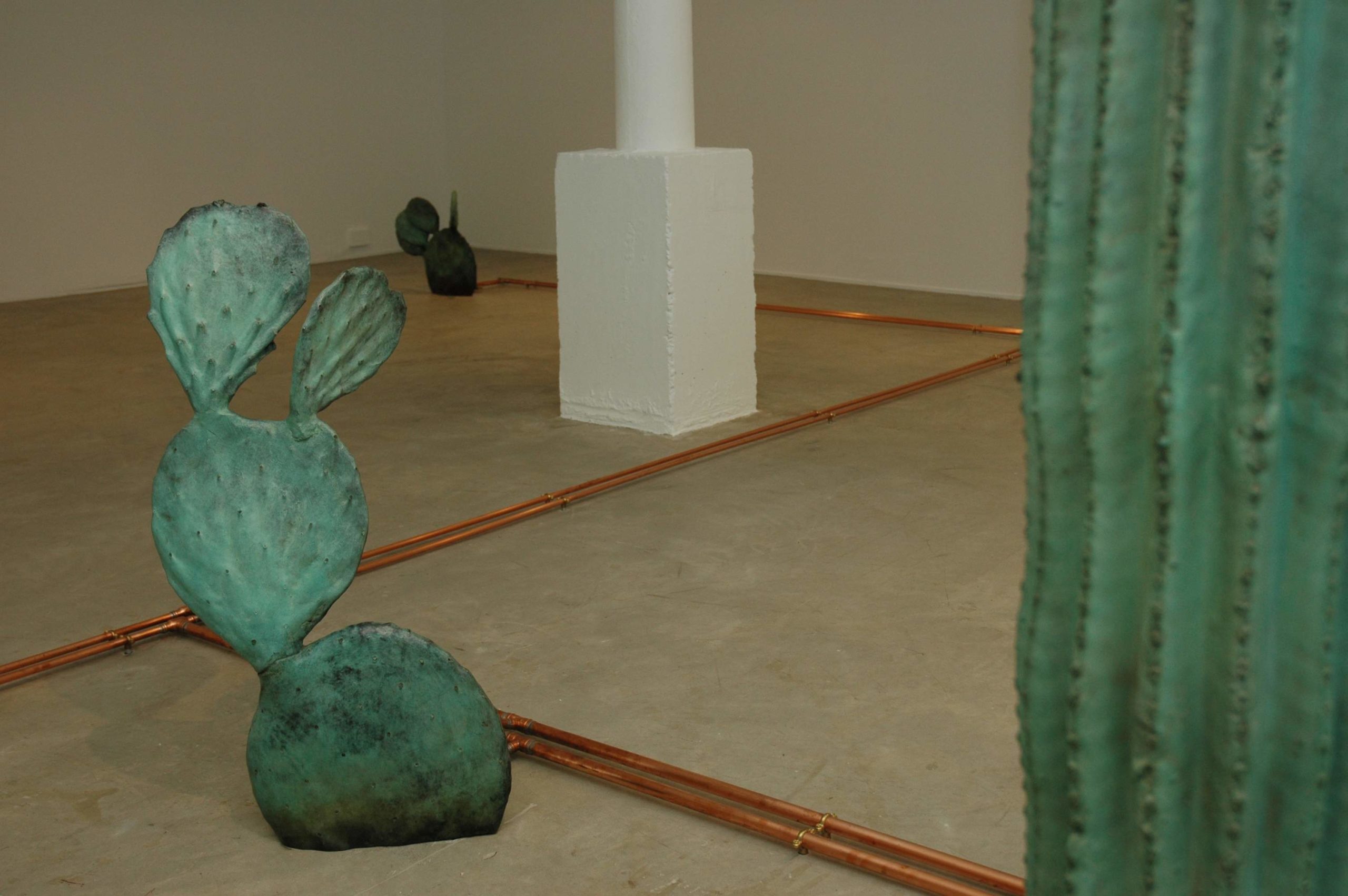 Void was delighted to host the solo exhibition C.A.M by Simon Starling who was shortlisted for the 2005 Turner Prize.

Simon Starling is fascinated by the process involved in transforming one object or substance into another. He makes objects, installations, and pilgrimage-like journeys which draw out an array of ideas about nature, technology and economics. Starling describes his work as “the physical manifestation of a thought process, revealing hidden histories and relationships.”

The exhibition C.A.M conflates various nocturnal tales of exchange, survival and opportunism. The title C.A.M refers to the process Crassulacean Acid Metabolism, where by cacti and other succulent plants reduce water loss by taking on Co2 at night and thus survive in the harshest of arid climates. Although this process was first given its name in 1813 by the Moravian missionary Benjamin Heynes who discovered just such behaviour in the leaves of the plant Crassulaceae, which acquired a bitter acid taste in the early morning, it had first been observed in 1804 by the Swiss scientist Nicolas Théodore de Saussure (1767 – 1845). The son of the celebrated geologist and mountaineer, Horace Benedict de Saussure and great uncle to linguist, Ferdinand de Saussure, Nicolas experimented regularly with Optunia cacti and observed that, unlike most plants, they respire at night. He published his findings in Recherches Chimiques sur La Végétation.

The form of the exhibition is also inspired by a tale of Swiss ingenuity already investigated in the photographic work “By night the Swiss buy cheap-rate electricity from their neighbours which they use to pump water into holding reservoirs. By day they use the stored water to generate hydroelectric power which they then sell back to their neighbours at peak-rate prices.” This verbosely titled work that involved the re-photographing of a set of images made by the America artist Christopher Williams of the Grand Dixance Dam, proposed a relationship between the storage of artworks and the use of Swiss mountains and lakes as a kind of vast battery capitalising on daily fluctuations in electricity prices to generate revenue from nearly nothing.

The work C.A.M which involved the casting and installation of bizarrely shaped radiators to heat the exhibition space, was also inspired by the nocturnal activities of southern African cable thieves who cut down miles of valuable aluminium and copper overhead cables. They recycle the metal, melt it down and recast it, often in the form of simple three-legged pots that can then easily be moved across boarders to neighbouring countries hungry for scrap. Large quantities of this stolen metal is believed to find its way back into the hands of the cable manufacturers and inevitably back onto the creosoted wooden poles from where it was first plundered. Thus, as in Switzerland, a system of exchange is created where there wasn’t one before, and people that were disenfranchised from a larger economy have found a way, irrespective of legalities, to enter in.

Like many previous works by the artist the installation C.A.M sets up a relationship between the production and display of an artwork. Our reading of the artifacts involved is only possible in relationship to the knowledge of their means of production, a system that both mirrors and critiques the broader cultural realm that inspired them.

Simon Starling was born in Surrey. He studied at Maidstone College of Art (1986-7) and Trent Polytechnic, Nottingham (1987-90), before completing an MFA at The Glasgow School of Art in 1992. Interested in the journeys made by people and objects, the origins of desire, and the value of materials, some of Starling’s most notable works have transformed one object into another. For example, in an early work from 1996, Starling took the metal of an antique silver spoon to make copies of a fake twenty-pence piece he had found. His work has been shown worldwide including the 50th and 53rd Venice Biennales in 2003 and 2009 respectively, and he was awarded the Turner Prize in 2005. Recent exhibitions include Devils in the Making, GoMA, Glasgow (2015); Nine Feet Later, The Modern Institute, Glasgow (2015) and Metamorphology, Musée d’art contemporain, Montréal (2015). Starling now lives and works in Copenhagen.