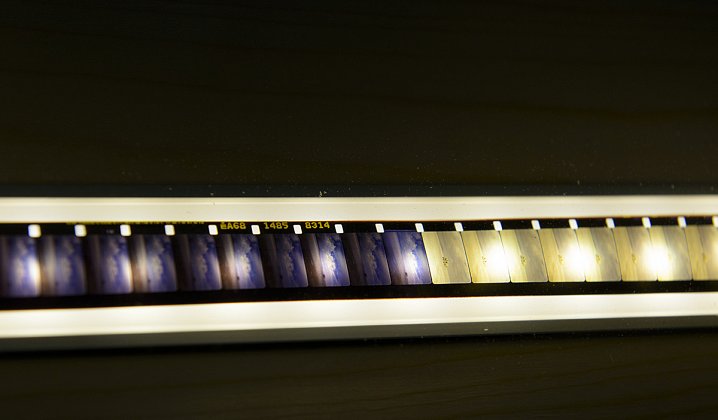 The Starry Messenger has evolved from an interest in the ‘perceptual moment’ of film, a borrowed phrase that is intended to position filmmaking and film watching as an expanded way of thinking in a visual language not limited by strict rationality and simple causality, which engages with the materiality of film as a manifestly analogue physical and chemical process.

The seven selected artist filmmakers engage with what is made visible and invisible in the emulsion and grain and lights and darks of each unique celluloid print, and explore the materiality of the film medium through physical manipulation of film and alternative processes. This expanded understanding of the analogue film-making process has run parallel to a growing awareness that the survival of analogue film-making itself has come to resemble a campaign for a critically endangered species – as film processing labs are seemingly no-longer commercially viable and are closing – and so filmmakers, artists, and critics across the world have had to come together to campaign for institutional support to safeguard the ability to manufacture, shoot, process, print, make and project film.

At the campaign savefilm.org you can add your support to the call for national and international organisations to take active steps to protect the medium of film, and request that UNESCO recognise film, the practice of filmmaking and film projection as world cultural heritage. – Declan Sheehan, curator

For more information about Marika Borgeson see her website

has been working in film and sound since 2004. She lives and works in London.

Born USA, 1983. MFA in Experimental and Documentary Arts from Duke University. Assistant Professor of Media Arts at the University of Montana.

The Starry Messenger was kindly supported by The Arts Council of Northern Ireland and Derry City Council Legacy Fund.