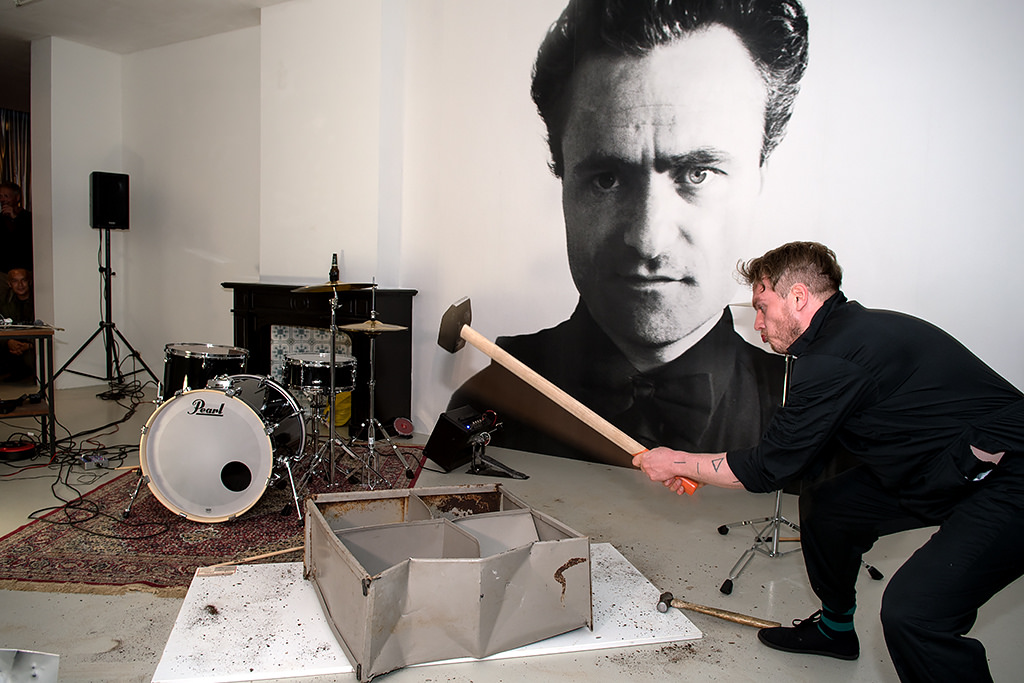 Northern Irish artist Keef Winter lives and works in London. He combines his interests in art and architecture using sculpture, installation, sound and performance. He completed a PhD in 2013 entitled The Handyman Aesthetic at Ulster University. Winter’s studio process generates abstract apparatus that reference urban dissonance and reflect on cultish practices. He has a live act called Handyman that mixes electronics, sounds of sheet steel, vocal samples and drumming.

For more information about Keef’s work please visit his website.

The Cusp of Your Credenza

Tissue is a short account of the historical and anthropological role of handheld tissues in modern history.

Irish artist Anita Delaney lives and works in London. Working mainly in moving image, she is interested in the tender and abject. She was the 2016-2017 recipient of the New Contemporaries and SPACE studio award. Recent shows include the 2017 Videonale, Bonn, Future Refrains at ASC gallery, London and she is currently working on a new moving image commission for Sick Monday at the Genesis Cinema, London.

Working mainly in moving image, Anita Delaney graduated with BA Fine Art from IADT in 2006 and MA Fine Art from Chelsea College of Art, London in 2011. She has recently shown work at The Rotterdam International Film Festival, 1646 Project Space, The Hague and Ormston House, Limerick, Ireland. In 2016 she is the recipient of the New Contemporaries’ Studio Bursary with SPACE in London.

For more about Anita’s work please visit her website.

Dead Her is written, directed and performed by Sonia Shiel in a narrated sequence of synchronised and interwoven, audio-cum-visual punchlines, using animation, performance, appropriated footage and a desktop cursor. In it the central protagonist is a woman half-way through her life, who undergoes treatment to attain a fuller, more meaningful smile.

Sonia Shiel is a Dublin born visual artist, whose works synthesise object, image and sound in performative and immersive installations. At Void Gallery, Shiel premiered Dead Her, a narrated visual presentation, written, directed and performed by the artist. Dead Her is one of a number of recent narrative works that was featured in her new book of short stories each exploring the pursuit of creative agency, – or living – with and without art. It was published in 2018, by UCD‘s Parity Studios Press.

Shiel has had exhibitions at The Crawford Art Gallery, Cork; the Irish Museum of Modern Art, Dublin; the Lewis Glucksman Gallery, Cork; ISCPNew York; Temple Bar Gallery and Studios, Dublin; Kulturbunker, Frankfurt; Rua Red, Dublin; the Butler Gallery, Kilkenny and the RHA Gallery I and II, among many others. Recent performances and readings include Treeline, TBGS, Artbox and the NCAD Gallery. She has been the recipient of many awards, and international residencies, with the support of the Arts Council and Culture Ireland, and has completed recent fellowships at Fordham Law School, New York and the School of English, Drama and Film at UCD.

For more about Sonia’s work please visit her website.