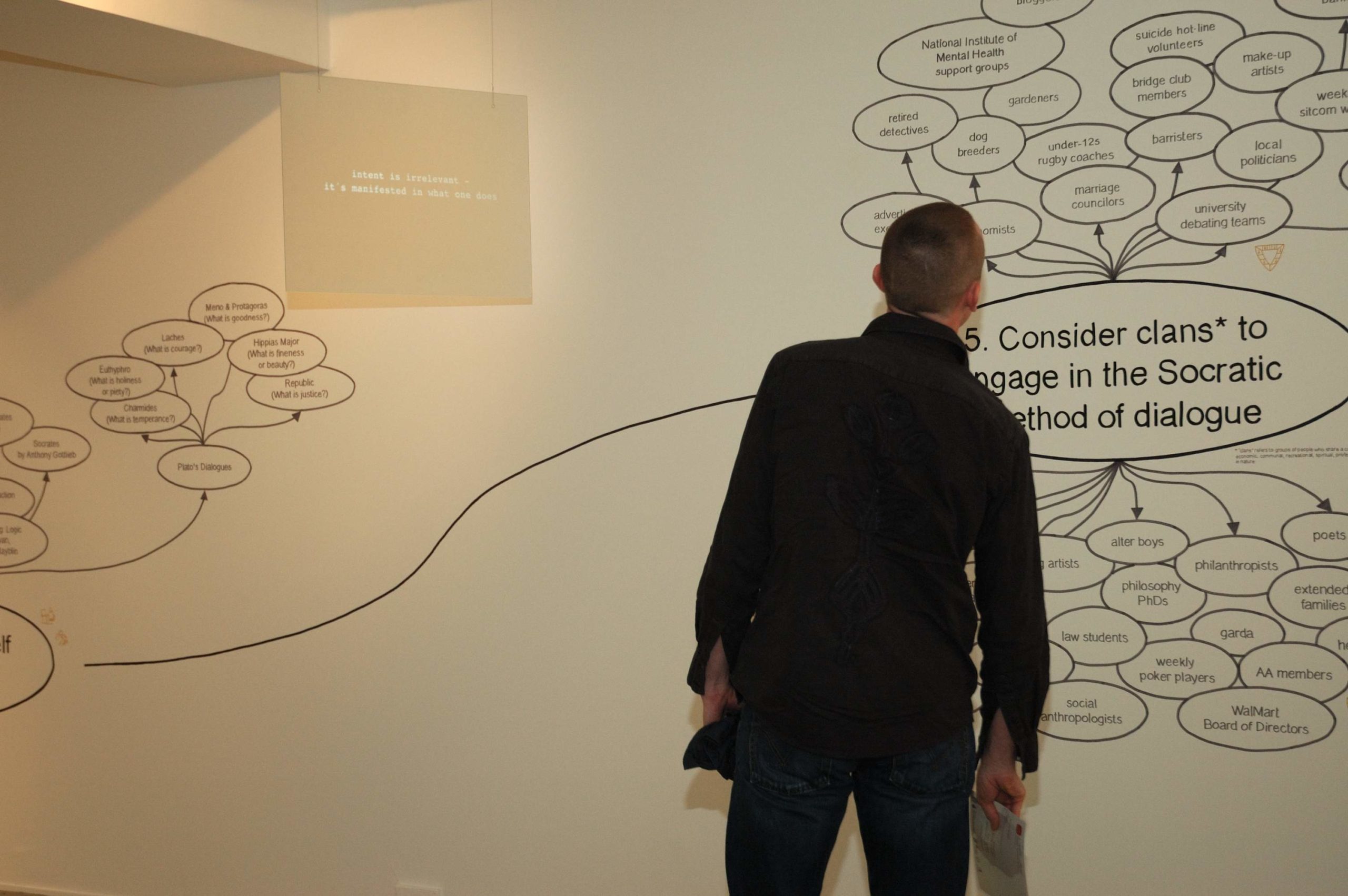 Theresa Nanigian’s art practice involves creating profiles of contemporary Western life, be it a profile of a single individual, a catastrophic event such as 9/11 or an entire country at a particular point in time.  These representations often borrow from the analytical systems, tools and aesthetics of other disciplines such as philosophy, economics and logic. In a recent body of work tally, Nanigian considers everyday worries such as time constraints, over consumption, social status and spiralling debt.  These overarching concerns are put under the microscope and subjected to a variety of touted modern remedies such as self-help programs, list making, and exhaustive data collection.  As such, the methods used to solve the problems are both exploited for their curative benefits and subverted to expose their shortcomings and our overdependence on them.

Nanigian’s exhibition for Void what is… used the ethical debates instigated by Socrates in ancient Greece as a framing device for an investigation into contemporary views on how one should live their life. These fundamental and timeless queries have been outlined in Plato’s early Socratic dialogues and encompass such questions as:  What is holiness and piety?  What is courage?  What is friendship?  What is goodness?  What is fineness or beauty?  While they may sound elitist and of only theoretical concern, they are basically the very same questions being asked in newspaper editorials and in college campuses across Ireland today. what is… appropriates the specific tactics of Socrates’ “trial by dialectical ordeal” to put today’s opinions about virtue to the test.

Apart from How to illuminate the soul (a 42-metre wall drawing of the entire process Nanigian undertook to create the body of work for Void), all the works in the exhibition stem from the single question “What is goodness?” In making the work Nanigian sought out a number of so-called clans, small groups of people who share a common interest and asked them the question. The work that ensued takes the form of a series of sound recordings of her discussions, a two-channel projection logging an inventory of the myriad of questions and answers pertaining to goodness, a portrait series of some of the participants and a running commentary of pie charts and bar graphs. The latter attempts to neatly package and bring closure to her quest for defining goodness.  At once serious and absurd, Findings (Goodness) demonstrates with the clarity that only analytical charts can provide, that Socrates was right when he declared there are never any clear-cut answers, only more insightful questions to be asked.

In her exhibition What is… Nanigian contemplates a question posed by Socrates 2,500 years ago – What is goodness? The most prominent work in the show (a 42m wall drawing) brings the viewer both figuratively and literally on her journey to seek the answer to this timeless question – one that has as much relevance today as when it was first queried by the philosopher in the town square of ancient Athens. The exhibition also begs another question: Is it ridiculous to embark on a rigorous analytical exercise to determine how to lead a better life? Or is it necessary and vital to comprehensively address one of life’s most important questions – a question which is neglected behind more “urgent” decisions such as, what to buy in the shops for dinner tonight? Or where to go on summer holidays?
This consternation between the desire to give the important things in life their fair due and the concern for over analysis are at the core of Nanigian’s work.

An American artist currently living in Dublin, Nanigian spent 15 years working on
various business positions such as strategic management consulting and new business development. As a dedicated list-maker and a fan of the two-by-two matrix, Nanigian explores the poetry of statistics and the fine line between hope and absurdity that can be generated by an ambitious Gantt chart.